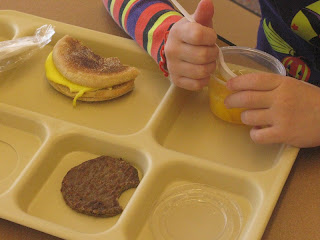 Chartwells at its menu website called this "toasty turkey ham and egg sandwich on a whole wheat English muffin." Looks more like turkey sausage to me, and obviously this little girl wasn't swayed. She took one bite out of the sandwich and removed the sausage. She's now turned her attention to the "chilled pineapple cup" that came with this breakfast.

I can report that the egg patty comes frozen from Michael Foods, Inc., in Minnetonka, Minn., which bills itself as "the world's largest egg processing company." We've written about Michael Foods before. They make a dubious "breakfast quesadilla" that was served in D.C. schools last year, heated and served in its plastic wrapper, as well as the infamous scrambled eggs that are cooked at the factory and arrive at schools frozen.

This year, Chartwells has taken a different approach. Rather than serving processed and packaged breakfast items like the aforementioned quessadilla, they are composing a breakfast entree from separate components. While the egg patty comes from Minnesota, the English muffin is made by Bake Crafters in Collegedale, Tenn. (We wrote about Bake Crafters yesterday and their whole grain bagel.)

I know you are dying to learn the ingredients in this package. Here's what's in the egg patty, according to the shipping container from Michael Foods:

And here's what's in the English muffin, according to a shipping label from Bake Crafters: