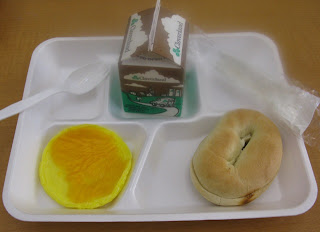 Here's something I had not seen before: an egg patty, smeared with processed cheese, served alongside a bagel.

Presumably, the egg patty is supposed to be sandwiched between the bagel slices.

I wondered if the egg patty came from the same place as the scrambled eggs served at my daughter's elementary school. Those are cooked with about 11 other food industry ingredients in a factory in Minnesota and shipped frozen. Well, just about everything served in the school cafeterias in the District of Columbia is made in a factory somewhere and shipped frozen.

From what I saw, the kids approached this breakfast tentatively. They seemed more interested in the bagel than the egg. They just didn't like the looks of that cheese. Can you blame them?
Posted by Ed Bruske at 6:22 AM