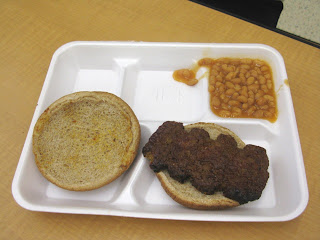 The menu for D.C. schools posted by Chartwells-Thompson calls this a "BBQ beef riblet." It may look like ribs, but I guarantee its never been near an actual beef rib. And cattle don't have "riblets." They have Fred Flinstone-size ribs. So this is something that's been re-constituted and shaped to look like ribs, just like the phony grill marks the food processors put on the "beef teriyaki bites."

The menu also called for fresh baby carrots. The 10-year-old who took this meal might have simply declined the carrots. I didn't see any on any of the kids trays. (Hardly surprising, since the kids don't like them.) Between the beef, the bun and the beans (also a vegetable), this qualifies as a complete meal. 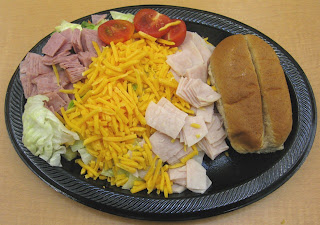 The alternate was this gorgeous chef's salad. This got me thinking that maybe the food services administration has beefed up the staff at my daughter's school in response to all the blogging I've been doing about the meals served there. Salad is often an alternate, but you don't see them putting on the nine's like this very often.
It's true the meat is all processed government turkey, even the stuff that looks like ham. And the lettuce is the usual iceberg, most likely from California. Still, it looks great. The one drawback was an absence of dressing for the salad. I asked the boy to whom this lunch belonged if there weren't any dressing for it and he said, "I didn't see any."
Score lots of style points for this effort.
Posted by Ed Bruske at 6:00 AM