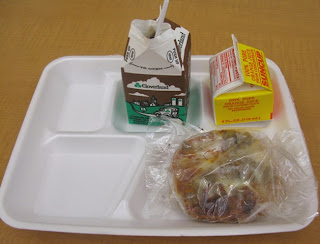 Parents may hate to hear it, but pizza is the all time favorite food of kids at school. But pizza for breakfast? Is that a good idea?

Like most meal items served in District of Columbia schools, it arrives frozen from Schwan's Food Service, Inc., in Marshall, MN. Schwan's Food Service calls this product "Tony's Breakfast Bagel." It's not clear who Tony is, or why he insists on calling this product a "bagel" when the label says it's covered with "pizza" sauce and even to the untrained eye is clearly a pizza.

Is Tony embarassed to be serving pizza to children for breakfast? (I would print the ingredient list here, but it's too long, full of things like sodium citrate, and sodium aluminum phosphate and sodium tripolyphosphate and magnesium oxide, and ferric orthophosphate. So many sodiums and phosphates....)

But clearly this item is designed for children. Because right on the box label it says that one 2.6-ounce "breakfast bagel" provides one ounce "equivalent meat/meat alternate and 1 serving of bread alternate for the Child Nutrition Meal Pattern Requirements." For a nutrtionist back at a computer trying to figure out what to order for school breakfasts, this sort of information from a food processor in Minnesota makes the job much easier.

The instructions on the package advise cooking the "breakfast bagel" for eight to 10 minutes in a convection oven set to 375 degrees. But at our school, it's placed in a commercial steamer and heated while still inside its individual plastic package. It comes to the serving line piping hot. (The temperature in Washington hit 88 degrees the day this was served, a record.) 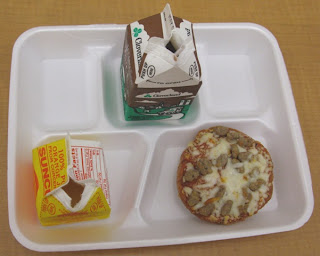 This is what it looks like after the wrapper's removed, to be washed down with chocolate milk and orange juice. 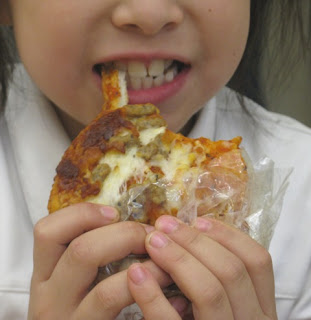 This little girl was using the plastic wrapper to hold the pizza. How else do you eat it? 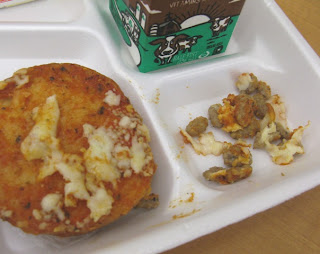 But my daughter declared, "This stuff is nasty." She was referring to the turkey "sausage" topping on the pizza. "It tastes raw," she said. So she picked it all off. The other kids started removing their sausage, too.
Posted by Ed Bruske at 6:00 AM