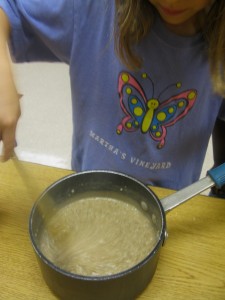 Who knew kids could love oatmeal so much?

Our food appreciation classes have landed in Scotland. This is the land of oats, and I looked for a way to make the traditional haggis. You know, that delectable pudding of sheep hearts, lung, liver and oats all cooked together with fat and onion in a sheep's stomach. But I couldn't think where to get a sheep's stomach locally. In fact, it's my understanding that until recently, it was illegal to sell sheep's stomach. So I settled for oats.

This turned into a marathon cooking lesson--quite grueling, actually--as the kids made not only oat scones, but oatmeal three different ways.

To start the class, I showed the kids three different varieties of oatmeal: standard rolled oats, which are made by passing the grains under intense pressure through steel rollers. "Quick oats" are rolled oats that have been cooked, then dried, so they can be rehydrated in boiling water almost instantly. Steel cut oats are whole grains or "groats" that have been chopped into bits with steel blades, hence the name. These are my personal favorite as they retain a pleasant toothsomeness after they're cooked. They're available in bulk at Whole Foods, or sold in cans or boxes under the famous McCann's label.

I had my doubts about an oat scone. Would it really be edible, or hard as a rock? They turned out to be quite good.

Turn the dough out onto a lightly floured surface. It will be slightly sticky. Knead it two or three times until it holds together, then flatten it out with the palms of your hands or a rolling pin to a thickness of 1/2-3/4 inch. (For small scones, divide the dough into two wheels.) Cut the dough into wedges and place these on an ungreased baking sheet. Bake in a 425 degree oven for 15 minutes, or until the scones are beginning to brown. Serve with a glass of cold buttermilk.

Steel cut oats take much longer to cook than rolled or quick oats. Plan on 35 minutes, approximately. First, toast 1 cup steel cut oats for two or three minutes in 1 tablespoon melted butter in the bottom of a moderately hot saucepan. Add 3 cups boiling water, reduce heat and cook gently, covered, for 25 minutes without stirring. When 25 minutes have elapsed stir in 1/2 cup milk and 1/2 cup buttermilk. Cover and cook an additional 10 minutes. Remove from the heat and stir in 1 heaping tablespoon brown sugar and 1/4 teaspoon cinnamon.

Rolled oats can be ready to eat in 10 minutes. Originally I had planned to have the kids chop fresh apples to add to the oatmeal, but we were so pressed for time I completely forgot. First bring 1 3/4 cups water and a dash of salt to a boil. Stir in 1 cup rolled oats and cook over moderately low heat for five minutes. You definitely do not want your oatmeal to boil over. When five minutes had elapsed, stir into the oatmeal 1/2 teaspoon cinnamon, 1/4 cup dried cranberries and 1/4 cup chopped walnuts (optional). Cover and let sit off the heat for five more minutes. Stir in 1 tablespoon molasses or maple syrup and a generous splash of milk. Serve hot.

Quick oats are ready literally in a minute. Just follow the manufacturers instructions, which typically involve pouring 1 cup oats into 1 3/4 cup boiling water with a dash of salt. Add whatever you like to the finished oats--chopped apples, perhaps, a bit of maple syrup, cinnamon, milk. It's all good. And good for you.