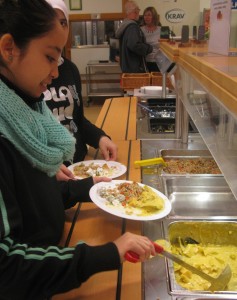 After years working as a restaurant chef in Stockholm, Michael Backman was ready for something different. He'd had it with complaining customers. He wanted to feel inspired by his work again. So the advertisement he stumbled across in a free weekly newspaper six years ago grabbed his attention: "Wanted: Head Chef for School Restaurant."

"I had four teenage children who kept talking about how bad the food was at school," said Backman. "I didn't believe it could be that bad. But when I finally saw it, I realized it was."

Meanwhile, the man behind the ad, a burly, no-nonsense school principal and karate instructor named Bjorn Grunstein, had been fighting his bosses in the schools administration to place the ad. According to their personnel book, there was no such thing as a "head chef" for his school. Grunstein was supposed to be looking for a "kitchen matron," they said.

Grunstein doesn't play by the book. He ran his ad anyway, adding "kitchen matron" in minuscule type. He figured the chef he wanted would get the message.

"Many years ago we took in a company to provide our meals. It was one of the largest catering companies in Sweden and they serve shit," Grunstein growled. "They didn't like me very much, because I'd walk around the cafeteria holding a plate of mashed potatoes upside-down. There was more glue than potatoes."

As it turned out, Backman the discontented chef and Grunstein the iconclastic school principal were a perfect match. Working together, this pair of mavericks dumped the regular fare of gluey mashed potatoes and processed chicken nuggets and replaced them with gorgeous, scratch-cooked buffets.

The day I visited the Annersta School last week was 'vegetarian Wednesday.' The entree on display was something I'd never seen before on a school menu: leeks and potatoes in a curried cream sauce. Next to it was a baked pasta dish with a tantalizingly herbaceous tomato sauce, along with an array of salads: cole slaw, red cabbage, cottage cheese with pimento, creamy sliced apples, a pilaf of pearled barley and carrots. There was also an Iranian-style tomato and egg soup.

In Sweden, kids serve themselves. And at Annersta School, located in a a low-income community dense with immigrant families and refugees, they were really digging into the curried leeks.

"I told him [Grunstein] that if he did what I said, he'd have the best school food in Sweden within three years," said Backman.

By many accounts, he does. 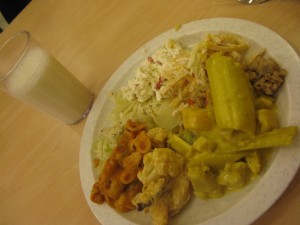 Perhaps the most remarkable thing about lunch at Annersta School is that what most Swedish students eat pales in comparison. Sweden has had a school lunch program since the 1940s. In 1997 the national government declared that all children--around 1.4 million--are entitled to a free lunch through primary school, or age 16. This year, the government mandated that those meals must be "nutritious," although exactly what that means is still unclear.

But "free" lunch doesn't necessarily mean good food, even in a country as progressive as Sweden. According to prominent Swedish school food advocate Annika Unt Widell of Swedish School Meal Supporters (Skolmatens Vanner), a group funded by the Swedish Federation of Farmers, some children get porridge or other cheap breakfast foods for lunch. In most schools, Swedish-style pancakes and tacos are the most popular items and the kind of leafy greens and other uncooked garden vegetables we in the U.S. usually associate with fresh salad rarely make an appearance.

Stockholmers were recently stunned by reports that at least 50 high schools in the city were not serving lunch at all, but instead give students vouchers to eat at local fast food outlets. Many high-schoolers routinely take their midday repast at McDonald's.

Kids, meanwhile, complain they don't have enough choice at lunch, that the food is overcooked or undercooked, or that it just doesn't taste very good.

Still, many Swedes have fond memories of their school lunches and have good reason to beleive they are better overall than what children are fed in the U.S. "I tend to think of the Swedes as spoiled sometimes," said Amy Leval, an American who lives in the Stockholm suburb of Solna with her Swedish husband and two daughters, five and seven. "They lose sight of just how amazing they have it and how lucky they are. There is a large sense of entitlement here which stretches into the school lunch program."

Unlike here in the United States, where a tightly regulated school meals program is administered and paid for by the U.S. Department of Agriculture, rules in Sweden are rather lax to non-existent, although most municipalities have a "dietary plan," according to Unt Widell.

In the U. S., schools that participate in the meals program must offer children specified amounts from different food groups both at breakfast and at lunch. The USDA only reimburses schools for meals that are actually served, and only low-income children are entitled to free food.

In Sweden, schools are only required to offer a vegetarian option. Money for meals comes from the total education funding the national government metes out per pupil, around $6,000 per year, depending on age. How that money is used is determined first by 290 municipal authorities, who may well spend it on things other than education, and then by school officials, who may not be especially engaged in the school dining experience. 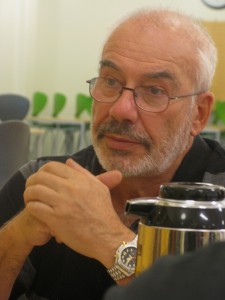 What's driving concern over school food in Sweden now are the same issues bedeviling parents in the United States. Even though commercial food marketing to children is forbidden in Sweden, kids there have grown much too fond of fast food, sodas, french fries and non-nutritious junk.

"The problem I have isn't money, it's getting the kids to eat the food," said Grunstein. "In some families, dinner is McDonald's. So they are not used to eating the kind of food we are now serving here. In their world, fast food is very important."

Grunstein sees a healthy, attractive lunch as essential to raising successful citizens--part of his mission to address all the needs his students bring to school. "It's an important part of everybody's life," he said. "If I want my pension to grow, they have to to out into the world and get good jobs. It's part of every school to educate, not just teach. We teach for life, not just for school."

I was invited to Stockholm to join a small group of journalists from Germany and Russia on a two-day tour of Swedish school food sponsored by the Swedish Institute, a government agency that promotes Swedish culture. The Swedish government has included public feeding programs such as school lunch as part of an initiative called "Culinary Nation," conceived by the government's rural affairs minister, Eskil Erlandsson, as a way to celebrate Swedish cuisine and create 20,000 rural jobs by developing food exports, agri-tourism and artisanal farm products.

The government paid for my travel expenses to and from Sweden, as well as my lodgings in downtown Stockholm.

Two days is hardly enough time to fully explore what is happening in Sweden's school cafeterias. But in 10 meetings in as many different locations--including lunch at two different schools and a visit to an organic dairy farm--we did cover a lot of territory. What I learned is that Swedish children are subject to many of the same pressures as their counterparts in the U.S., and many of them are benefiting from a growing intervention by professional chefs who see the school cafeteria as a place where they can find greater personal rewards by improving the food served to children. 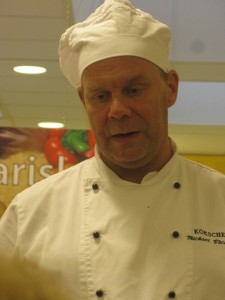 In fact, injecting professional chef experience into school kitchens may be even more important than the extra money so many advocates assume is the answer to rehabilitating school food's shabby reputation.

"It doesn't matter that much how much money you have," said Backman. "It's what you do with the ingredients."

Backman and the food service directors at a second school we visited said they spend around eight Swedish Kroner ($1.27) or a bit more on ingredients per meal. Annika Unt Widell said the figure is closer to 12 Kroner ($1.90) nationwide. But dollars don't go as far in Sweden as they do in the U.S., where the average outlay on food per school lunch is reckoned to be around $1.

Professional chefs, as opposed to minimally trained "kitchen matrons," or even the housewives who used to run Swedish school cafeterias to earn "fur money," bring a depth of experience making food dollars stretch. Preparing food from scratch, they can economize with ingredients and make appealing dishes for less than the cost of processed factory foods. Leftover salad dishes are mixed into new salads the next day, for instance. Uneaten entrees are frozen, to live another day as part of some other dish. Say, curried leeks with pasta.

"This is my favorite place in the kitchen," says Backman, opening the door to the walk-in freezer. Plastic buckets of frozen leftovers, all carefully preserved by Backman, line the stainless shelves. 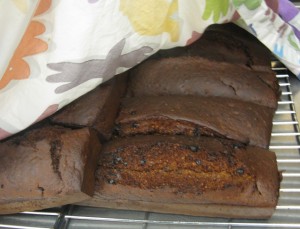 "In the restaurant business, you are working for someone who wants to make money. There's no room for waste," said Backman. "For the same amount as the school was paying that caterer, we are making two main dishes instead of one, plus a soup. We are baking our own bread. And we've raised the percentage of organic ingredients we are using from zero to 25.9 percent."

Backman accomplishes all this--feeding 700 children and 100 staff every day--with help from four other kitchen workers. The local personnel office says he should have six.

I spoke to Backman in the cafeteria or what Swedes like to call the "school restaurant," a huge room well-lit by a bank of windows and globe lights suspended from the ceiling. Students serve themselves at four long food bars, then sit in stylish molded plastic chairs at gleaming white tables. Swedes take pride in their reputation for sleek design (think Ikea). But many of the country's school cafeterias are cramped and congested, forcing children to eat in a hurry and on odd schedules.

As we talked, a young girl suddenly made her way toward Backman. She beamed up at him and said something in Swedish I couldn't understand, then scampered away.

Backman smiled. "The kids here want to tell the chef what great food he makes," said Backman. "I can tell you, you don't get very many hugs from customers working in a regular restaurant."