Please Pass the Pancakes and Lingonberry Jam: What Swedish Kids Eat at School 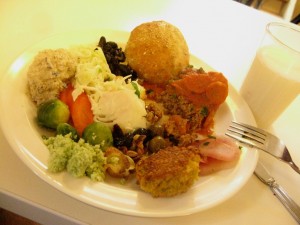 My lunch plate at Lilla Academy

On a press junket paid for by the Swedish government, it's hardly surprising I was steered toward some of the best school food the country has to offer. I didn't get to see schools where the food is awful or even below par. But what I did see at two different schools in Stockholm gives a rough idea of the kinds of lunches being served to the country's 1.4 million primary school children every day.

At the Lilla Academy, a school devoted to music instruction on the campus of what was a 19th-century hospital, the lunch buffet consisted of numerous dishes simply displayed in large bowls and steamer trays in a somewhat cramped, semi-subterranean dining hall. Unlike the restaurant-style food at Annersta School I described in the first part of this series, where the kitchen is run by a chef with years of restaurant experience, the meal at Lilla was simple but incredibly varied.

There was a bowl of sliced carrots, a bowl of Brussels sprouts, marinated olives, two different kinds of cole slaw--one with vinegar, the other creamy--cottage cheese, sliced beets, black beans with red pepper and feta cheese, an entree of meat loaf stuffed with shredded vegetables, a vegetarian alternative of falafel. At the end of the buffet was an intriguing display of bowls containing roasted eggplant (like baba ganouj without the tahini), a chutney of coconut, mint and lime and an apple chutney with balsamic vinegar.

Naturally, I had to try all of it and I can attest that while some of the items were extremely rudimentary, it was a most stimulating meal.

A self-serve buffet with numerous salad-type offerings is typical of Swedish school lunches, although the quality can vary widely and students voice many complaints, as I described in yesterday's post. This buffet with its many moving parts was the work of two remarkable women--Karin Berglund and Karina Gummeson--who've been working so long together they finish each other's sentences. 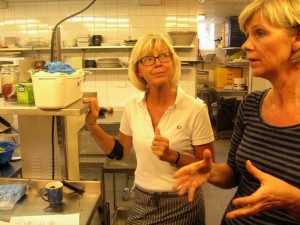 According to the group Swedish School Meal Supporters, two out of three schools in Sweden employ at least some staff with professional chef training. Berglund and Gummeson studied nutrition and meal planning. Before coming to the Lilla Academy, they spent 10 years together managing 25 school kitchens. And when they aren't cooking at school, they spend their off hours running a food consulting business.

In a small kitchen they call "the submarine," Berglund, Gummeson and another helper make an average 420 meals each day--375 for kids, the rest for staff.

Half of all Swedish schools prepare meals in their own kitchens, while the other half have meals catered from a kitchen they share with other schools. In some municipalities, the cost of transporting meals from a central kitchen to individual schools represents a significant expense. Some schools opt for professional catering companies to provide meals.

When Lilla Academy was established 13 years ago, it was proposed that the school share a kitchen with several other nearby schools. But principal Bo Lindgren was determined that his students would have freshly cooked food from their own kitchen.

"It was not so popular to start a kitchen," said Lindren, who apparently had no easy time convincing his bosses they actually needed to invest in one. The cost was around 3.5 million Kroner ($555,000). Lindren approached equipment manufacturer Electrolux, which agreed to install the kitchen on loan.

"The food is absolutely necessary for the results we achieve in the school," Lindren said.

Meals are cooked from scratch, mostly using raw ingredients, although Berglund and Gummeson do use frozen components as well. They also bake their own bread. Typically, they prepare eight to 10 different "salads" each day and their entree menus follow a pattern: one day for pasta, one day for fish, one day for a typical Swedish dish such as meatballs, one day for something international and one day for soup.

Student participation in the lunch is nearly 100 percent. Food from home is not permitted in the dining hall.

Because Sweden lies so far north, it's growing season is short and fresh vegetables are precious. I did not see any leafy greens or what we in the U.S. would consider typical salad ingredients on the two school buffets I visited. The focus instead is on storage vegetables such as cabbage and root vegetables. Often there are three different kinds of cole slaw on the buffet at Lilla, and Swedish cuisine would hardly be Swedish without potatoes, whether mashed, baked or boiled. Carrots, beets, turnips and rutabaga all play a role. Berglund and Gummeson were proud to show us chips they had made by roasting thinly sliced parsnips. They said most of the produce they use is organic. 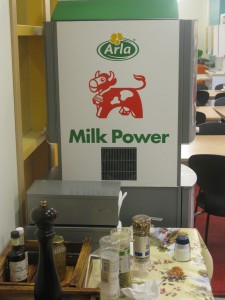 Both schools we visited offered milk and water in the cafeterias. Children serve themselves milk from electric coolers, the water from plastic pitchers. The Swedes are big milk drinkers and dairy is an important part of the diet everywhere. In keeping with current health trends, the milk is low-fat--actually .5 percent--something I found somewhat ironic considering that just a few feet away was a display of traditional Swedish crispy flat bread--knackebrod--along with a tub of butter or margarine.

A school meal would hardly be complete without knackebrod, so you typically see clusters of children gathered around the bread display, grabbing the butter knife and slathering their bread. If they were offered jam--Sweden is big on berry preserves--they'd no doubt smear that on as well. 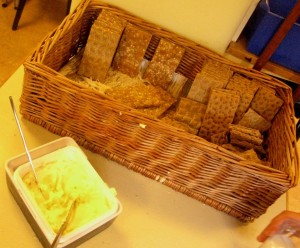 Swedish kids are wild for knackebrod

Note: Swedish schools do not serve chocolate milk or other flavored milk products, nor do they have a la carte lines offering all sorts of junk food for sale.

Children eat from re-usable plastic plates using metal knives and forks. That keeps a dedicated dishwasher busy most of the day. Because of the small size of the dining room at Lilla, students eat in several shifts according to age, the youngest at 10:45 a.m., although Swedish nutrition guidelines recommend that lunch not be served before 11. Lunch is served through 1:30. The small children come back at 2:30 in the afternoon for a snack, typically some form of dairy such as milk or plain yogurt, homemade bread, butter, perhaps a meat pate and fruit.

For an idea of what other schools are serving, here are recent menu listings for Kramfors, a municipality of about 20,000 inhabitants 300 miles north of Stockholm on Sweden's eastern coast. The menu, translated by Google, shows meat/vegetarian entrees:

"Our school meals were excellent," said Annika Brancato, who grew up in Kramfors but now lives outside Toronto with her husband and three children. "Unlimited milk, bread and specialty food for kids with allergies, etc. I wish I could have lunches like they do. I did not know it at the time," Brancato continued, "but our community allocates more money per student for their lunches than many other communites in Sweden. Kramfors is among the top five Swedish communities as to how much they spend."

Ten years ago, said Gummeson, afternoon snacks consisted of sweets. But not so much any more. Even the traditional Swedish fika--or mid-afternoon coffee break observed in work places across Sweden--seems to be trending away from cinnamon buns and other pastries toward lighter options like fresh fruit. Annika Unt Widell of School Food Supporters said that while tacos and pancakes are among the most popular foods among children, tacos are served only occasionally, and pancakes typically appear only as an accompaniment to pea soup or as a dessert.

One chef said he serves classic pancakes with lingonberry jam only as a special after-school treat. But at the Langbro Valley School in Stockholm, pancakes with blueberry jam and vanilla quark, or sour cream, were listed as the featured lunch entree yesterday.

One problem that continues to plague U.S. schools is the feasting around pizza, cupcakes and other junk food in frequent classroom celebrations. At Lilla School, Berglund and Gummeson throw a party for the students once a year to celebrate everyone's birthday.

What disturbs these school cooks most is all the food the children don't eat and throw in the trash. That's something I see every day in my daughter's school here in the U.S. Kids gladly eat the foods they like most--pizza, potatoes, chicken--and toss the things adults think they should be eating, like vegetables and whole grain products. Kids in Sweden also avoid certain foods in these categories, like the barley pilaf chef Michael Backman serves at the Annersta School.

"We're calling it 'Swedish rice.' It's more expensive, but the kids don't eat as much of it so it balances out," Backman said. "Kids aren't used to it. But I'm trying to get them to like it."

Backman said the worst waste occurs on days when he serves things kids especially like. They always take more than they can eat.

"One day we gathered up all the food the kids threw away the day before and placed it on a table where they could see it when they came in to eat," said Gummeson. "But what was their reaction? They just looked at it and shrugged their shoulders. So what?"

"What I would really like to do," said Berglund, "is just sit next to the trash can during lunch, maybe read a book, so they could see me. I think it would remind them to eat their food and not throw it away."