What's for School Lunch in Sweden? There's an App for That 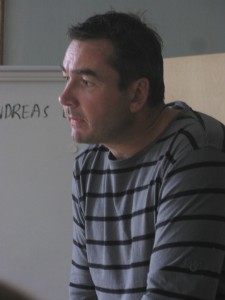 Andreas Egerup says he was standing in the grocery store trying to think what to make for dinner when it occurred to him to find out what his daughter had eaten for lunch at school. He didn't want to repeat something she'd already had, so he went to his iPhone and started to look for the school menu.

Minutes passed. Egerup busily worked the phone, clicking from one web page to the next. It seemed to take an awfully long time and a lot of effort to find that school menu. And then the proverbial light bulb clicked on: there should be an app for that.

One year and 500,000 Kroner ($ 80,000) later, filmmaker and entrepreneur Egerup is the proud owner of Sweden's first and so far only app for school lunch menus. Already he's placed it in 103 of the country's 290 municipal school system. There have been 150,000 downloads so far this year. And in April it was the number two i-Phone download in Swedish.

Apparently, where school lunch and technology are concerned, the sky's the limit.

"The school food thing was very important to me to be a good dad," said Egerup, who lives and works out of the remote town of Lulea, nearly 600 miles north of Stockholm. "Now you can see what's for lunch on your mobile phone."

According to Egerup, parents as well as students are downloading the app--called Dinskolmat, or Your School Meal--to four different types of "intelligent" phones currently available in Sweden. Along with expanding use of Facebook and other social media, the trend is injecting some glitz into the once staid school lunch scene, connecting families with school cooks, chefs with chefs, and increasing momentum for better school meals across the country.

Here's how it works: Egerup sells access to the app to individual municipalities, who pay 250 Kroner (about $40) for a one-semester subscription for each school in the district, up to five schools. If there are more than five schools, all of the other schools are covered at no extra charge.

So far he's signed up 103 districts, giving him plenty of room to grow. At this point, he doesn't have to leave his office much. Sales are spreading by word of mouth. To push things along, he started a Facebook page where students and parents can sound off. "People complain that their school isn't covered. I tell them to tell the kitchen manager." As of yesterday, the site had 1,053 "likes."

Egerup said it only takes a few calls from parents before a school administration will call him, requesting to subscribe.

In some districts, one app will cover all the schools because they all share the same menu. But other municipalities had multiple satellite kitchens with different menus. Individual districts or schools enter their menus into Egerup's data base. When you call them up with the app, they appear in the same format under the Skolmat logo.

For instance, here's what the current menu looks like for the Langbro Valley School in Stockholm. Here's another for Osteraker municipality outside Stockholm. Here's a third for the John Bauer High School in the city of Vaxjo. (Use your browser's translation feature to view these menus in English.)

To promote the idea, Egerup created posters the schools can hang in their dining halls. Egerup says the technology is drawing communities much closer to their school chefs.

"They get so much positive feedback from students and parents," he said.

Chefs are getting hip to the social media craze. Some have started their own Facebook pages where they can talk directly with their customers. Frederik Kampenberg, the head chef of a school in Orebro, 125 miles north of Stockholm, has a Facebook presemce here and here.

"Originally I was going to create a website, but the I thought, Where are the kids? On Facebook, of course," Kampenberg said. "I wanted to show in pictures that we really put our heart into the food--and lots of time and effort, too. It was a way to communicate more directly with students. They can comment on anything and nothing is censored."

Meanwhile, Swedish School Meal Friends, the principal advocacy organization for school lunch quality, has started an online chat room where school chefs from all over the country can talk to each other about issues affecting the program, share strategies, recipes and tips. 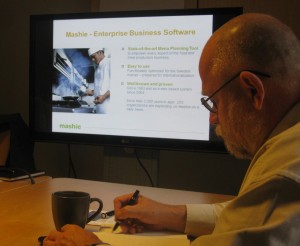 As part of a press tour organized by the Swedish Institute, I and several other journalists from Germany and Russia visited a software firm in Stockholm that produces Mashie, an online menu planning program aimed at schools that allows chefs to view nutritional information for meal components and integrate their menus with food procurement.

The Swedish government this mandated that in addition to being free, school lunch must also be "nutritious." Specific guidelines have yet to be developed. But when they are, program like Mashie are certain to be more in demand. So far, the company has sold subscriptions to more than 100 of the country's 290 municipalities.

One feature of the program is color coding of meal ingredients according to healthfulness--green for good, yellow for less good and red for really bad. Call up a hamburger, for instance, and you get a pie chart full of red.