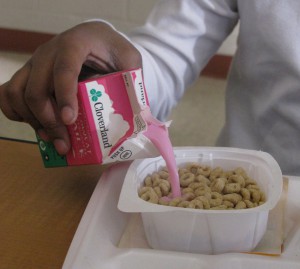 Who can you trust on flavored milk?

In yesterday's post about the American Academy of Pediatrics' stance on flavored milk I attempted to stay as close as possible to the results of my interviews and other reporting rather than my interpretation of what that reporting revealed. Some explanation is in order, since the way in which the information was gathered was somewhat out of the ordinary.

While attempting to illuminate the American Academy of Pediatrics' flavored milk policy, I quickly learned that the academy has no single "spokesman." Rather, I dealt with a "contact" named Gina Steiner, who insisted she not be quoted. Instead, she put me in touch with members of the academy who were deemed best positioned to answer my questions. All of my interviews were conducted by e-mail, and sometimes the pace was agonizingly slow. Thus, I exchanged a total of some 45 e-mails between Steiner and academy sources over a period of two months, between May and July. I waited to write this report until after summer vacation had ended and families again were focused on sending their children to school.

Readers may be surprised to learn, as I was, that the AAP really has no formal policy focused on the feeding of flavored milk to children, other than brief mentions in its policy addressing sugar-sweetened beverages in schools, where flavored milk--along with plain milk, fruit and vegetable juices and water--is cited as a "healthful alternative" to sodas, and in the academy's statement on increasing children's bone density and calcium intake. Rather, AAP messaging on chocolate milk seems to depend more on its "partnership" arrangements with dairy organizations such as the National Dairy Council and MilkPEP, groups that are desperate to keep flavored milk a beverage of choice in the school meals program.

Is it really coincidental that the Dairy Council and MilkPEP are also financial contributors to the pediatrics academy? The academy insists that these contributions in no way influence its policies or messaging. But the dairy groups make liberal use of the academy's name in its chocolate milk promotions, as well as the names of pediatricians who are "appointed" as "unpaid advisors" to the dairy industry when they rise to positions of influence.

Some may be disappointed that the academy is not more transparent on questions of exactly how much money it receives from dairy interests, or exactly what its "partnership" arrangements entail. But more important is the question of trust and how that is compromised by the academy's acceptance of funding from the dairy industry.

Also, the academy gives parents no specific guidance on how much--or how little--sugar-sweetened milk products they should feed their children. Rather, the pediatric group leaves parents to ponder the question on their own. Here's how Jatinder Bhatia, chair of the AAP's committee on nutrition, put it to me:

"Parents should look at the child's total intake of sugar for the day. If they are getting it in flavored milk, then look at their cereals, snacks, etc. to be sure it's limited there. Also, many parents allow their kids to have flavored milk at school, but they serve plain milk at breakfast or dinner."

The AAP's silence on this question sets it apart from the American Heart Association, which recently released guidelines recommending that children consume no more than half their "discretionary calories" in the form of sugar. It should be noted, however, that calculating exactly what those discretionay calories are [PDF] for any given child can pose a challenge.

Dr. Robert Murray, until recently chair of the AAP's council on school health, says my questions suffer from a "common missperception" about what the AAP's statement on sugar-sweetened beverages means to say. But the statement is written in plain English and speaks for itself. And keep in mind, when you ask the AAP for its position on flavored milk in schools, this is what you get. The problem is not with missperceiving AAP policy, but with the fact that the personal opinions of individual pediatricians--opinions that so neatly align with those of the dairy industry--are bandied about where no formal AAP policy exists.

Indeed, some readers may find it curious that a professional organization with the reach and influence of the American Academy of Pediatrics should give so little formal policy guidance on the subject of flavored milk at the same time it is accepting money from the dairy industry and participating so closely in the industry's promotion of that same product. Its inaction on this point seems all the more confounding in light of the controversy flavored milk continues to stir in the school meals program--a program that feeds an estimated 32 million of the nation's children daily--and at a time when so many parents and school administrators are desperate for guidance from the medical community.

The academy says it is in the process of revising it policy on sweetened beverages in schools. This would be the perfect time to set matters right.