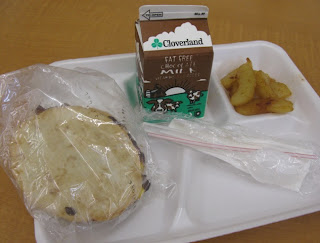 Egg and sausage quesadilla with chocolate milk and baked apples.

Often, processed foods arrive at school in individual plastic packaging and are simply reheated as is from the frozen state. The kitchen at my daughter's school has a commercial steamer that heats meal items while still in the plastic, making service a breeze. They are displayed just like this in the food line.

What you see here in the plastic wrapper is an egg and sausage breakfast quesadilla. My daughter complained that she didn't want the quesadilla. What she had really wanted was a yogurt. But she said the kitchen staff would not allow her to make an exchange, so she asked me to intervene.

I took the offending quesadilla back to the food line, but when I tried to trade it in for a container of yogurt I got a real hard time from the woman sitting at the cash register, who wagged her finger at me and said, "No! No! No!" She said there were no exchanges allowed, but when I took the yogurt anyway she made me remove the quesadilla. "We can't take food back," she said.

Shouldn't the kichen crew be making eating more healthful food easier for the kids, not harder? 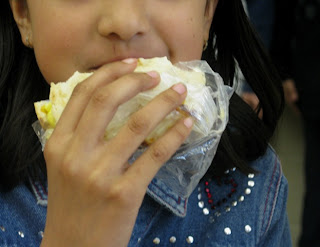 My daughter's breakfast companion declared the quesadilla "good." This is how she ate it after opening the plastic--like a sandwich.