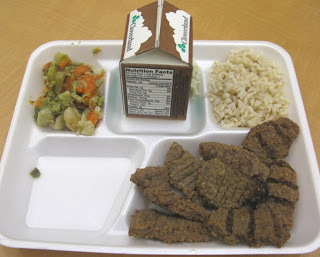 
These "beef bites" are small patties of beef donated by the federal government mixed with soy protein and pre-cooked with an Asian-flavored glaze, then imprinted with phony grill marks before being frozen by Pierre Foods in Cincinnati, OH. From their frozen state, they only need five minutes reheating in a 350-degree oven before than can be placed on the steam table and served to children.

In the upper left is a sad mix of cauliflower, carrots and broccoli. When I spent time in the kitchen of my daughter's elementary school earlier this year, this same mix arrived frozen from Mexico in 20-pound bags. The vegetables look great coming out of the bag, but then they're dumped in a steamer and by the time they've been on the steam table awhile, the broccoli is completely disintegrated. Most of these vegetables will end up in the trash because the kids don't eat them. 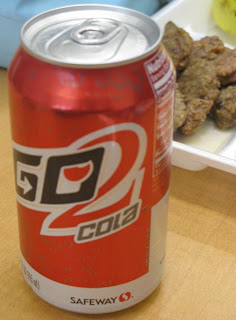 They say that what kids bring from home often is worse than what's served at school. One 10-year-old girl got this "Go Cola" out of her backpack. The 12-ounce can contains 44 grams of sugar--11 teaspoons--or 176 calories. That's five teaspoons more "added" sugar than the American Heart Association recommends as the maximum a grown woman should consume in an entire day.