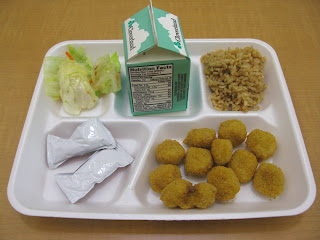 Chicken, along with pizza and potatoes, is one of kids' favorite things to eat at school. You see it in many different forms. When shaped into these little balls and breaded at the factory, they're called "popcorn" chicken. They arrive pre-cooked and frozen in bags, and are quickly reheated in a convection oven.

The other components for this meal are seasoned rice, iceberg lettuce salad and milk. Some of the kids also chose a piece of fruit. I saw pears and bananas on some of the trays. 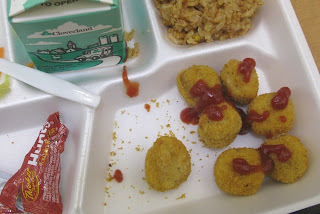 Kids have fun with the popcorn chicken. Proper etiquette, I think, demands that you dab each one with a little ketchup, then eat it with your fingers. 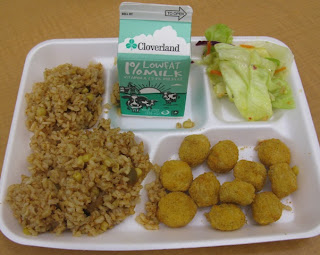 More disturbing was seeing a very overweight fourth-grader convincing one of the girls at his table to give him her rice. She shoveled it onto his tray with her "spork" and he walked back to his seat with this huge portion. This is a load of starch he probably doesn't need. But there's no supervision for this sort of thing.
Later, I noticed that one of the girls had torn her popcorn chicken into little pieces. As if that weren't strange enough, she started stuffing the pieces in her pants pocket. When I asked her why, she said she was saving it for gym class, "when I get hungry."
Posted by Ed Bruske at 1:25 PM