You Call This Food? 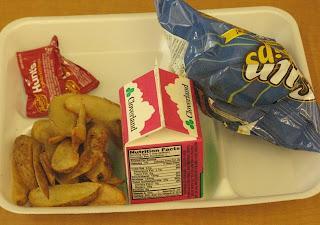 I was ready to have a perfectly civilized discussion--blog-to-blog--with Sam Fromartz over at ChewsWise on the subject of what we can do to get kids to eat better when I was stopped dead in my tracks by the lunch being served at my daughter's elementary school here in the nation's capital. Look at the photo above and tell me what you see. Do you see the same thing I do? French fries, a bag of Sun Chips, and an 8-ounce carton of strawberry-flavored milk.
You almost have to rub your eyes and take a second look. Can this really be true? Hello, Jamie Oliver! Not all the bad school food is in Huntington, W.Va. We've got the same stuff right here in Washington, D.C., barely a mile from the White House.
To my knowledge, Michelle Obama has never addressed the glycemic bomb being served daily to public school children right outside her door. But I could be wrong. Yes, just a mile or so from the White House, where we're told over and over the Obamas are hard on the case, solving the nation's childhood obesity epidemic, kids in elementary school are being served chips, fries and strawberry milk for lunch.
Oh, wait. I forgot the ketchup. Two foil packets of it. That should count for something. And as far as chips go, Sun Chips--made from corn, whole wheat, rice flour, whole oat flour--are probably the lesser of many evils. Still....
I actually found it heartrending to watch my daughter's lunch group--10- and 11-year-olds--waiting patiently for their midday meal, first at their tables, then pressed against a wall in a queue near the door to the food line, only to emerge at the other end with this on their Styrofoam trays. Some also had a mealy-looking chili with beans. Some had a fresh pear. But under federal "offered-versus-served" rules, kids only need to take three of the offered items to qualify for a federally-subsidized meal. That's how you get fries, chips and strawberry-flavored milk. (Fries count as a vegetable, and the milk protein, the chips grain. Get it?)
Yes, we can have a conversation about how to get kids to eat healthier foods. But first, we need to ask, Where are the adults in this picture? Children have not yet reached the age of consent. Grownups are supposed to take care of them. Yet when you enter a public school cafeteria, you step into a kind of culinary gulag where for years the adults grinding away anonymously inside have done their best to keep the truth of what they are doing hidden from the public at large. And the public at large has been just as happy not knowing the details. This was a matter we conveniently left in the hands of "professionals"--food service workers, nutritionists, government regulators, food industry lobbyists--who have spent the last several decades devising ways to make "food" for children that grownups don't have to pay for.
Now, with Jamie Oliver's "Food Revolution" being aired on network television, and school meals showing up in vivid color in the blogosphere, we are finally getting a glimmer of what "school lunch" really means. It's not a joke any more. What we feed children has consequences. And the pictures are ugly.
Yet it is obvious that children--and especially what they eat--are not a priority. We would much rather spend billions fighting foreign wars, building tanks, dropping bombs. Honestly, what we get from most politicians is lip service and a nickel tossed into the collection plate. We are on the brink of losing our collective memory of what constitutes real food. Yet no one is accountable. We are not to judge the "lunch ladies" too harshly. They are doing the best they can. We are not to judge the food service directors too harshly. They also are doing the best they can. We should not judge our local government leaders too harshly. They depend on federal dollars. We should not judge parents too harshly. They are busy working to make ends meat....
Would anyone like to step forward and take responsibility for feeding our children in school?
The final indignity came when I was abruptly stopped from taking further photographs in the lunch room by the school's assistant principal. She whisked me off to a conference room where the principal was having lunch with teachers (what would happen if the adults at school had to eat the same food as the kids?) The principal told me she had been admonished for the series of articles I wrote from the school's kitchen back in January, a glimpse behind the curtain that revealed the "fresh cooked" scheme the school system had recently implemented in collaboration with its contracted food service provider, Chartwells-Thompson, was nothing of the sort. To continue taking photographs of the food, the principal said, I would need clearance from higher up. "I don't want to get in trouble again," she said.
Turns out there was an aftermath to my expose of the D.C. school kitchen. The young kitchen manager I profiled, who liked so much to add shredded cheese to boost the flavor of all those industrially-processed dishes she was heating in the steamer, has disappeared, presumably re-assigned.
I'm trying to square this with what Anthony Tata, schools Chancellor Michelle Rhee's chief operating officer, told The Washington Post about me and that series of articles on Feb. 12: "I think it's great a parent is super-involved and we are soliciting his input as we go forward with our program changes," Tata said.
Blah, blah, blah.
I accuse the adults responsible for school food of gross indifference. I accuse all of us of failing to step up to the plate. I challenge Chancellor Rhee and Anthony Tata to have a real conversation with parents about the food children are eating in school. But let us not fail because we refused to look at the problem square in the eye.