Is it a tortilla, or an omelet?

I always wondered why Spaniards called something that was obviously an omelet a tortilla. Turns out tortilla simply means a "flat cake" in Spanish. The extremely flat corn or wheat tortilla we know from Mexican cuisine would be just one example. In Spain, a tortilla is made from eggs. It looks like an omelet, but the cooking process is different.

I admit, this was my first egg tortilla making experience. So I'm learning along with the kids. I'm used to making an omelet the French way, by messing around the edges, tilting the pan, doing whatever might be necessary to get the runny eggs onto the hot surface of the pan so they can cook. Then you fold it in half.

A Spanish omelet, by contrast, is simply left to cook in the pan. At the appropriate moment, you invert it onto a plate and slide it back into the pan so that both sides are browned.

What I had a hard time grasping was how the eggs could cook completely through without the bottom getting burned. I may have cheated by covering the pan to speed up the cooking process. In any case, I think our first attempt came out pretty well, that being a classic tapas-style tortilla stuffed with potatoes and onion.

In another departure, rather than cooking sliced raw potatoes in the pan with oil as prescribed in the original recipe, I boiled them ahead of time. Otherwise we wouldn't have enough time in our class to complete the dish. The kids peeled the cooked potatoes and sliced them into small pieces. But first, they diced an onion and we cooked that in olive oil over moderate heat. When the onions were soft, we added the potatoes and warmed them through. 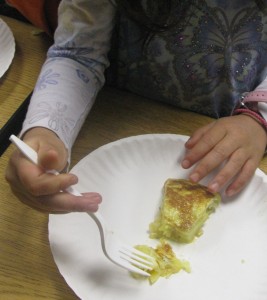 Kids are wild for potato tortilla

If this were a French omelet, we would have poured beaten eggs into the pan with the onion and potatoes. But Spaniards instead scrape the warm onions and potatoes into a bowl of six beaten eggs and mix everything together. Add a little more oil to the pan, swish it around, then pour the egg, potato and onion mix into the pan to cook. The pan should be hot at first, but as the tortilla cooks lower the heat and, if you follow my advice, cover the pan to trap some of the heat.

Check the bottom of the tortilla to make sure it doesn't burn. When the eggs were almost cooked through, but still wet on top, we inverted the tortilla onto a plate and slid it back into the pan to brown on the other side.

Finally, slide the tortilla onto a cutting board and cut into wedges. At a tapas bar, you'd want to eat this with a glass of cold, white wine. The kids loved it with0ut the wine, and passersby couldn't help being drawn in by the aroma of onions and potatoes.

That's our version of a Spanish tortilla as we bid adieu to our baking classes and resume our virtual world culinary tour. In case you hadn't noticed, we are now is Spain and will be working our way through Europe.