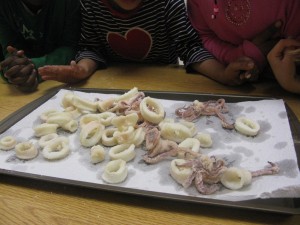 Kids eat a heap of squid--and beg for more

This may have been our most fun food appreciation class ever--frying squid for tapas.

The kids were a bit squeamish about the raw squid at first. But I urged them to touch it. Picking up the squid in their hands, they soon discovered how thrilling slimy, squishy seafood can be. Pretty soon they were holding the tentacles up in the air and wearing the squid bodies on the fingers. It's great to see kids learning about foods they've never seen before using all of their senses. Squid definitely fits the description of "strange" food for most children, although most of them knew what fried calamari meant.

After putting their inhibitions aside, they were soon cutting the squid into rings for the fryer. I chose my own, extremely simple method: dredging the squid in corn starch seasoned with salt. It's traditional to dip the squid in egg, then flour, to create a batter. But I like the cleaner looks and taste of squid fried my way. Sometimes I will dip the squid in well-beaten egg white first. That results in a very light, crispy coating--better, I think, than the Arthur Treacher's treatment. 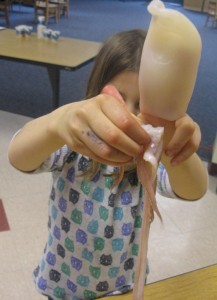 Suddenly it's fun to play with squid

I purchased these squid already cleaned at Whole Foods and explained to the kids how these are one form of sustainable seafood, since squid reproduce rapidly and proliferate in the world's oceans. Fisher closer to the top of the food chain--tuna and swordfish, for instance--are much more fragile, ecologically speaking, since they take so much longer to mature. So for the time being, at least, it's still safe to eat squid--and small oily fish such as sardines--with a clear conscience.

We mix the corn starch and salt in a bowl. After dredging the rings and tentacles from one or two squid, we place them in a sieve and shake the excess corn starch back into the bowl. Then then squid are eased into our home-style deep-fat fryer, the oil at 360 degrees F.

I keep the fryer on a counter far away from the children. They aren't allowed to go near it, for obvious reasons. The squid will bubble and hiss at first. Let them cook about 1 1/2 or 2 minutes, until they are crispy. Don't wait for them to brown, unless you've used a batter with flour. These calamari stay pretty white.

And they disappear fast.