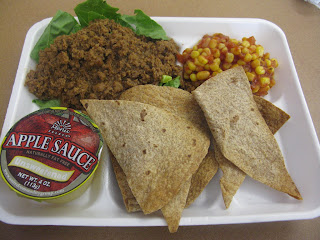 By Ed Bruske
aka The Slow Cook
Kids pretty much love Mexican food these days so it didn't take much to convince them to eat this "taco salad." But you probably noticed that the chips in this case are not the "baked whole grain tortilla shells" Chartwells advertised on its website, but rather toasted whole wheat pita chips.
In fact, I liked the pita chips and the kids for the most part seemed to like them as well. 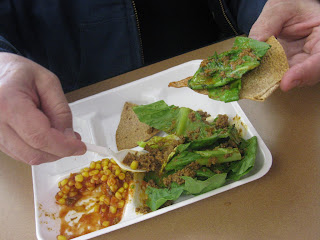 This was the preferred method of eating this meal: using the spork to spoon the ground turkey meat onto the chip. (That's me, as captured by my daughter. The kids did not eat the lettuce.)

According to the Chartwells website, there was supposed to be a choice of turkey meat or "southwest beans," but I didn't see any beans. Instead, kids were given this "Tex Mex corn," which was frozen corn mixed with canned salsa. 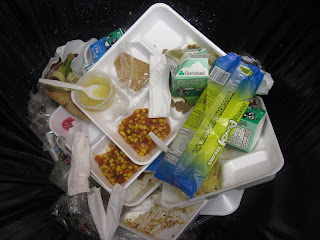 As my daughter observed, the corn was a bit on the cold side. But I'm not sure any of the kids in the lunchroom noticed, because I did not see them eating the corn at all. Mostly it went into the trash can untouched, as you see here.

Really, it can't be repeated often enough: if you're going to introduce new foods to kids, you really need to work with them to get them to eat it. Otherwise, it just gets trashed.

D.C. Public Schools serve some 36,000 lunches every day. Imagine all the corn that got thrown away.