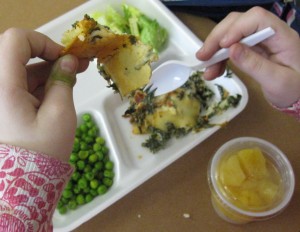 The School Nutrition Association, representing some 53,000 of the nation's cafeteria professionals, has told the USDA it objects to nearly every aspect of proposed meal guidelines that call for bigger helpings of fruits and vegetables, more whole grains, fewer French fries, and less salt.

Food policy advocates--including first lady Michelle Obama--have hailed the guidelines as a giant step forward toward healthier school meals. But lunch ladies complain the federal government is sticking them with a bill they can't afford, that the rules in some cases may be impossible to implement, and that kids may not eat the improved cafeteria fare the government is proposing. The SNA says key provisions of the guidelines should be delayed, softened or abandoned altogether.

The SNA's formal comments, submitted to the USDA this week, point up the huge disconnect that sometimes exists between policy makers and those who work on the front lines of the school food controversy. For instance, Congress in its recent re-authorization of the school lunch program increased funding by just six cents per lunch. The USDA now estimates that the proposed meal guidelines will require 15 cents more for lunch and 51 cents more for breakfast.

Congress did not allocate any extra money for breakfast. The SNA suggests the new breakfast standards "be delayed until additional funding is available to help offset costs."

In a letter to the USDA, SNA President Nancy Rice says the proposed guidelines are simply too ambitious, and put too much pressure on schools to solve an obesity problem that is also the responsibility of parents and the food industry.

"SNA members do have concerns regarding their ability to meet the requirements of theproposed rule, especially as the impacts of the regulations are theoretical at this point, having never been piloted or studied...."

The SNA predicts rural areas and states such as Alaska will be hard-pressed to meet requirements for bigger servings of green and orange vegetables in school lunches, and that price fluctuations and seasonality could prevent schools from complying with the standard. The USDA should "encourage rather than require" the proposed vegetable selections, according to the SNA.

Along similar lines, school nutritionists object to a proposal that would limit serving potatoes and other "starchy vegetables" such as corn, peas and lima beans to just one cup per week, saying the rule "hampers school efforts to offer locally grown vegetables throughout the fall and winter, as well as regionally preferred foods such as corn in Mexican dishes."

The USDA guidelines would require that all grain products served in schools qualify as "whole grain-rich" within two years. But the SNA argues that such products are not widely available, and recommends delaying the requirement until the 2013-2014 school year.

Reducing sodium in meals by 50 percent within 10 years, as the guidelines require, may be impossible, the SNA says. Americans get most of their excess sodium from prepared foods. Even the USDA has said it isn't sure how the target would be reached, except through "innovation" not yet determined. The SNA says the government should at least make allowances for sodium that occurs naturally in foods such as milk and meat.

Finally, food service directors are concerned that requiring the healthier foods as outlined in the proposed guidelines will cause many students to drop out of the school lunch program. The guidelines would load up on foods kids traditionally don't like, and restrict menu items that are acknowledged favorites.

In fact, research sponsored by the USDA has projected that adopting a range of healthier options would result in a 5 percent reduction in participation at the elementary school level and an even greater dropout rate--12 percent--in secondary schools.

Here in the District of Columbia, school officials have undertaken a major menu overhaul, replacing processed convenience foods with freshly cooked vegetables, whole grains and even some scratch-cooked entrees like spinach lasagna. From what I see visiting the cafeteria at my daughter's elementary school, much of the improved food ends up in the trash. Frequently, the kids won't touch it.

School food service directors also object to a provision of the meals re-authorization that would require schools to start charging more for lunch. According the SNA, the move will almost certainly turn away children who pay full price.

Agriculture Sec. Tom Vilsack recently told several hundred SNA members gathered in Washington that he sympathizes with their dilemma. “I understand what happens when someone wants to impose on you a set ofrequirements that just don’t fit in the real world," he said.

The public comment period for the proposed meal guidelines ends April 13. Permanent guidelines could be in place as early as fall 2012.