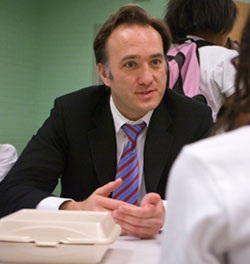 D.C. Publice Schools food services chief Jeffrey Mills is deeply disappointed with the district's contract with cafeteria giant Chartwells, The Slow Cook has learned, calling the agreement "crap" and outlining plans to establish nine satellite production kitchens the schools can use to make their own food sometime in the future.

Two new pilot food programs--one with D.C. Central Kitchen, another with Revolution Foods--have revealed the cost of lunch they provide to be $1 cheaper than what DCPS pays Chartwells. The pilot contractors are paid a flat rate to provide meals, while Chartwells receives an annual management fee, a fee for each meal served, plus reimbursement for all of its expenses.

What's more, Mills says he has to "police everything they [Chartwells] do," and still finds Tyson chicken, high-fructose corn syrup and other objectionable items on kids' cafeteria trays, even after he has specifically rejected them.

Mills is said to be convinced that he could "save $10 million" if D.C. Central Kitchen and Revolution Foods replaced Chartwells entirely, but those companies are not equipped to handle more than half the district's 123 schools. Mills envisions serving food cooked from scratch in all of the district's elementary schools, for instance. But that, he has said privately, is not likely to happen in the coming year.

Former schools Chancellor Michelle Rhee hired Chartwells in 2008 after declaring the schools unable to manage their own food service. At the time, according to former Chief Operating Officer Anthony Tata, the schools were losing between $11 million and $14 million annually on their cafeteria operations, buying pre-made "re-heat" meals trucked in from a suburban factory.

The initial contract with Chartwells called for a $28 million food services budget, under which Chartwells would reduce the flow of red ink to no more than $6 million annually. But Mills now says that "only $1 million of the reduction was guaranteed."

Chartwells also caused the schools a good deal of embarrassment. In January of last year, after spending a week in the kitchen of my daughter's elementary school, I published a series of blog posts detailing the highly-processed frozen convenience foods Chartwells routinely served at lunch--chicken nuggets, tater tots, "beef crumbles" and grilled cheese sandwiches made in Los Angeles and re-heated in their plastic wrappers. Breakfast was even worse. Along with frozen scrambled eggs and "french toast sticks" with high-fructose corn syrup, kids were eating Apple Jacks cereal doused with strawberry-flavored milk, Pop-Tarts, Giant Goldfish Grahams and Otis Spunkmeyer muffins.

On some days, children as young as five consumed the equivalent of 15 teaspoons of sugar before classes even started.

Subsequently I learned from documents obtained through the Freedeom of Information Act that Chartwells had turned over to the schools more than $1 million in rebates it had collected from large food manufacturers such as Kellogg, Pepperidge Farm and Otis Spunkmeyer. An assistant attorney general for New York State has said the rebating practice creates "an inherent conflict of interest" in the choice of foods served to children. Food service companies operating under a "cost reimbursable" contract, as is the case in D.C., are required to credit the schools for all rebates or discounts they receive.

The rebates Chartwells reported to D.C. schools represented five percent of total purchases, compared to the 10 to 15 percent that New York Assistant Atty. Gen. John F. Carroll says is the industry average he has encountered in his investigation of rebating practices there. It took D.C. school officials nine 9 months to get an accounting of food rebates from Chartwells, and Mills is said to be suspcious still that the schools are not receiving their due.

Chartwells is a subsidiary of Compass Group, a British-based international food service corporation that reported $23.5 billion in sales last year.

In December 2009, Tata tapped Mills, a restaurant developer from New York City, to be food services director, filling a position that had been vacant for more than a year. Within months after my expose of the food Chartwells was serving, Mills decided to remove all flavored milk from D.C. Public Schools and undertook an item-by-item overhaul of the Chartwells menu.

Around that same time, the D.C. Council approved a "Healthy Schools Act" that provided more money for school meals--10 cents for breakfast, 10 cents for lunch, and 5 cents for every lunch containing a locally-grown component. Consequently, meals look substantially different in D.C. schools today. Kids can choose from organic yogurt and home-baked muffins for breakfast. Lunches range from a scratch-cooked spinach lasagna to roasted bone-in chicken to a Cajunp-seasoned tilapia filet.

This year schools have saved $1 million on food, even while serving breakfast in the classrooms of most elementary schools for the first time and implementing a supper program in 99 schools. Breakfast in the classroom boosts participation and brings in federal susbsidy dollars that can be used to improve food quality. The supper program also is a money maker. Meals cost $1.40, but are reimbursed by the U.S. Department of Agiculture to the tune of $2.92 each through the federal Child and Adult Care Food Program.

With the addition of these two programs, the schools expect to serve 2 million more meals this year. Still, participation in the lunch line is down 1.5 percent.

The trouble now is the kids frequently won't eat the roasted local sweet potatoes or the lovingly prepared green bean salad. They need coaching, and schools need to reach out more to parents. Mills reportedly would like to see principals and teachers eating with the students. "Motivated principals make all the difference," Mills is quoted as saying. But the schools face "huge challenges with internal staffing."