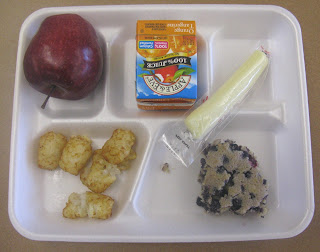 This "blueberry muffin square" is part of what has become "homemade" muffin Tuesdays at my daughter's elementary school here in the District of Columbia. Yes, our "lunch ladies," some of whom have worked 25 years or more in school cafeterias, do know how to cook things from scratch.

The "muffin" is made with corn meal, flour, sugar and frozen blueberries at the bottom of a stainless hotel pan, then cut into squares. I've tried it and it's pretty good. But just in case there wasn't enough starch on the breakfast tray, someone in the Chartwells home office decided to add "oven-baked hash browns"--or so said the online menu. As you can see, these became the ever-popular tater tots.

One other thing you might notice: although our school has a dish washing machine and normally serves meals on re-usable plastic trays, some meals are served on Styrofoam. Turns out there's a reason for that. Blueberries tend to stain the plastic, according to the kitchen manager, and kids won't eat off trays with blueberry stains.

The "Healthy Schools Act" approved by last year by the D.C. Council would have schools discontinue Styrofoam and adopt more eco-friendly trays at some point in the future.
Posted by Ed Bruske at 6:00 AM