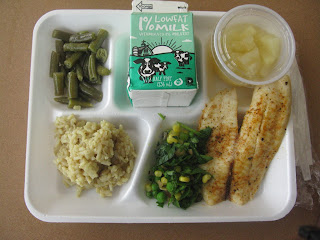 By Ed Bruske
aka The Slow Cook
Look! Clean fish fillets being served in D.C. Schools!
This tilapia with a bit of Cajun seasoning makes a beautiful tray, no? Next to it is something else I that seems very new" "crunchy spinach," which means frozen spinach mixed with corn, bits of green pepper and sunflower seeds.
Who do you suppose cooked up that recipe? 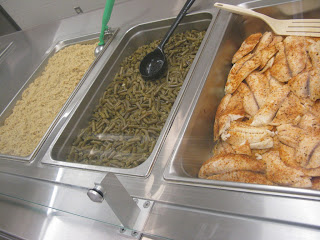 Here's a what the kids saw when they came through the food line. 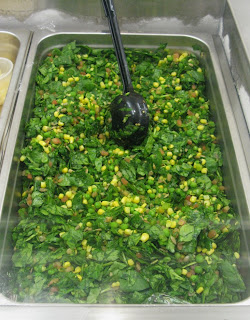 And here's what the "crunchy spinach" looked like in its hotel pan.
Okay, now for the bad news: As great as this meal looked, most of the kids in the lunchroom with my 11-year-old daughter didn't eat it.
To be more precise, I'd say about half of them at least tried the tilapia, and some of those were wolfing it down. "The ones who are eating it say it's the best thing ever," said one of the teachers who was monitoring things.
They also ate the canned pears and poked at the rice. But forget about those green beans and the "crunchy spinach." They wouldn't touch it. I tried the spinach. As much as I liked the concept, it was too cold. Almost frozen. Kids don't like spinach in general, and they seem to be really put off by exceptionally cold vegetables.
The tilapia fillets arrive frozen and are heated fairly easily. I wonder how the cost compares to other entrees the schools serve, especially the processed ones like those phony "grilled" chicken patties.
Posted by Ed Bruske at 6:00 AM