No More "Offer Versus Serve" 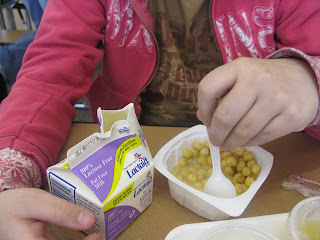 By Ed Bruske
aka The Slow Cook
Some weeks ago the kitchen manager at my daughter's elementary school informed us that daughter would no longer be allowed to decline the milk at mealtime even though she is lactose intolerant. Consequently, she would just throw the milk in the trash.
Up to that point D.C. Public Schools had practiced something called "offer versus serve." Under USDA rules [PDF], schools must give high school students the option of declining one of the four items offered for breakfast, or two of the five items offered for lunch. Offer versus serve is optional in elementary schools, but most school districts--including D.C.--use it.
Until recently, that is. It really bothered me to watch my daughter and other kids routinely toss perfectly good food like unopened cartons of milk or uneaten pieces of fruit directly into the trash. But despite weeks of pestering the food services personnel, I could not get anyone to tell me why the policy had been changed.
Then I got the word through a back channel: offer versus serve had been eliminated in D.C. elementary schools to speed up the food lines.
Apparently, some school officials complained that allowing small children to choose which foods they wanted--or didn't want--on their trays took too long. At my daughter's school, for instance, 30 minutes is allotted for lunch. Usually, the last kids through the line have about 15 minutes to eat. But the lines in other schools are longer, meaning the kids only have a few minutes to actually eat their food after waiting to be served.
So that's the situation here in the District of Columbia: the trash cans fill up with good food so that children will have more time to eat their meals.
In my daughter's case, it means getting a phone call from a dietitian at Chartwells, the district's food service management company, telling us that lactose-free milk--at extra cost--has been ordered specially for her so that anytime she takes a school meal she will get a carton of that to throw away instead.
Turns out daughter just doesn't like milk--period--unless it's to pour over cereal.
Posted by Ed Bruske at 6:00 AM