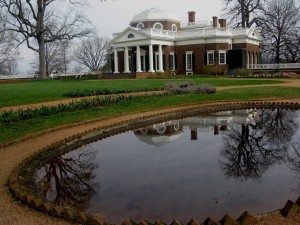 What would Jefferson have thought about school food?

Recently I was asked to travel to Charlottesville, Va., to talk about school food and I knew something important was afoot in Jefferson's home town when I checked in at the Budget Inn.

Waiting for me behind the desk clerk was a gorgeous gift box filled with treats from a local food emporium: chocolate almond bark, candied walnuts, handmade cheese straws, but also local foods, including apples, beef jerky and a half-dozen farm-fresh eggs.

All had been prepared courtesy of an amazing alliance of local food activistis, parents and University of Virginia educators laying the groundwork for a school food uprising in Charlottesville. I was part of a panel designated to pick up the discussion following a screening of the documentary Lunch Line at the Martin Luther King Jr. Center for the Performing Arts.

Charlottesville is big on history, but it's still a small town with fewer than 44,000 residents. There's only one high school for the entire city. Yet the list of organizers and sponsors for this event was a mile long, including something called the Local Food Hub, the University of Virginia Food Collaborative and an architectural firm--VMDO Architects--that specializes in designing environmentally friendly schools.

My contact was dynamo parent Ivana Kadija, who just now is trying to get her arms around the idea of a school wellness policy and is mobilizing to convince school administrators that kids there will survive without all the sugar in their food. She's encountering resistance to the idea of removing chocolate milk from the meal line.

On the way into town, we heard organizers being interviewed on local radio. When I arrived at the performing arts center, I was presented with a multicolored, four-page printed program. There was a pre-screening cocktail party--or wine, at least--around groaning platters of cheese and fruit. Organizers said they had no idea what the turnout would be like. But by the time the curtain went up and the lights went down, there were more than 200 people in the audience.

Believe me: That's a great crowd for a school food event. And it was all just a little embarrassing, considering the meager success we've had organizing parents here in the nation's capitol.

Luch Line traces the history of the national school lunch program using sometimes humorous cartoon characters and a group of student chefs traveling to Washington as part of a cooking contest as backdrop. Most of the audience stuck around the for the discussion with me and a distinguished panel: Dr. Matt Trowbridge is a physician and public health researcher specializing in childhood obesity. Charles Green is the director of the Division of Marketing and Development for the Virginia Department of Agriculture and Consumer Services. Nutritionist Alicia Cost is the former food services director for Charlottesville schools. And Andrea Early, nutrition director for schools in Harrisonburg, Va., has made a name for herself as an innovator in the area of incorporating local products into school meals.

The panel was moderated by Tanya Denckla Coobb, associate director of the UVA Institute for Environmental Negotiation, a specialist in local food securitiy issues and author of the forthcoming book Reclaiming Our Food: How the Grassroots Movement is Changing What We Eat.

Shaking hands with the master of ceremonies, Benjamin R. Cohen, I was astonished to learn that I had come fact to face with the author of one my favorite books on the history of soil husbandry, Notes for the Ground: Science, Soil and Society in the American Countryside. "You actually read the book?" was Cohen's wry comment to me.

Anyway, it was a lively discussion: too short, and I hogged the microphone, finally exasperating moderator Cobb, I fear. There was a terrific after-screening party as well with lots of finger food at a local restaurant--Maya. The following day, my wife, daughter and I made the obligatory pilgrimage to Monticello, where I couldn't help thinking that it never would have occurred to Thomas Jefferson to feed his 17 grandchildren Pop-Tarts and Apple Jacks and strawberry milk for breakfast, as is the case in so many of our nation's schools today. Jefferson is probably turning in his grave.

Our only mistake was booking a room for Saturday night at an old inn that kept a platter of homemade cookies on 24-hour display at the front desk. Worse still, there was a free breakfast that featured a buffet groaning with unlimited quantities of coffee cake and other sweets that were really light years off my diet.

Sunday morning, Ivana and her filmmaker husband Brian Wimer arrived at the inn to interview me unscripted on the subject of school food and what's wrong with it. Brian's edited version has been uploaded to YouTube and is presented here for the first time. I hope I sound reasonably sober. Please keep in mind I was making this up as we went along.

Here's wishing Ivana and everyone else in Charlottesville much success with their cafeteria mutiny.