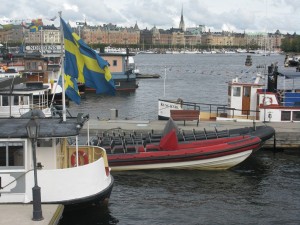 Stockholm is a series of islands

At first I thought it was a prank.

On September 7, I received an e-mail purporting to be from the press office at the Swedish embassy in Washington. I was invited to attend a "study visit" of the school lunch program in Sweden just two weeks hence.

"The Swedish Institute is willing to cover costs in Sweden and the Embassy will pay for economy class airline tickets," the note from press officer Larilyn Andre explained. "Or you are free to attend at your media outlet's expense if you are not able to accept this offer."

Well, I certainly didn't have a "media outlet" to pay may way. Could this be legit? Why me? And if it was legit, why the last-minute invite?

As I would later learn, the press junket I was about to embark upon had been instigated months earlier by the Swedish embassy in Berlin. They had contacted the Swedish Institute in Stockholm suggesting that since school food had become such a hot topic, Sweden might want to show off its free school lunch program, especially since the government had embarked upon an intiative promoting Sweden as Europe's new "culinary nation."

The Swedish institute, which promotes all things Swedish, had contacted embassies around the world. Apparently, the memo sat in someone's in box in Washington for all those months. That still didn't explain how they picked me. "I enjoyed your article about the food service agency programs in DC public schools and today's piece on flavored milk, and thought this might interest you," press officer Andre had written.

But while in Sweden, I learned that the Swedish embassy in Washington had been in talks for weeks with food service personnel in the D.C. Public Schools about holding a "Nordic Day" that would feature Scandinavian foods in the cafeterias. The event is now scheduled for Oct. 26, and some of the people I met in Stockholm are scheduled to be on hand. The following evening, Oct. 27, the Danish embassy is hosting a cocktail event to raise funds for salad bars in D.C. schools. (There are definitely perks to be had living in the nation's capital.)

D.C. schools food services Director Jeff Mills now admits that my name had come up in those meetings. "I mentioned you a lot," he said.

Okay, mystery solved. On Sept. 17, I flew off to Chicago's O'Hare Airport to board an extremely comfortable, seven-hour flight to Stockholm. Did I mention the complimentary cocktails? I landed at 7:30 Sunday morning and breezed through customs. But the "free taxi" into Stockholm I'd been promised never materialised and I was soon introduced to the high cost of living in Sweden. The express train from Arlanda Airport downtown--a 25-mile ride--cost an astounding $50. (Alright, it's cheaper if you buy a ticket from the machine on the platform, but I couldn't figure out how to work the machine.)

The city seemed deserted when I arrived at Stockholm's central train station. Using the map inside a guide book I'd purchased in the States (Time Out Stockholm), I managed to locate my hotel on foot, about a mile and a half away on Berzelli Park, near the waterfront. 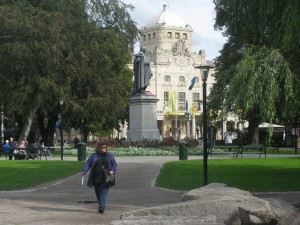 The receptionist at Berns Hotel--a beautifully appointed boutique hotel and famous entertainment complex in downtwon Stockholm--was so impressed by my travails that morning she urged me help myself to the free breakfast buffet, even though the usual check-in was still hours away.

At this point I might as well say something about the Swedish breakfast I experieced at Berns Hotel. It was a protein lovers nirvana. Cheeses, cold cuts, smoked salmon, sausage, bacon, eggs--especially since I'd been warned how expensive restaurants were in Sweden, I was primed to eat my fill. Oh, there were also pitchers full of various yogurts, a variety of granolas and cereals, an entire buffet table devoted to various whole grain breads and rolls. There was even a display of different teas for do-it-yourself brewing, along with a plate of truffles and assorted chocolates. 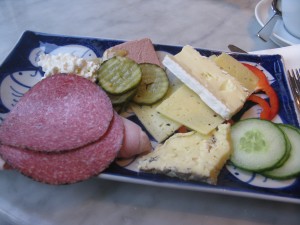 My breakfast at Berns Hotel

Who needs lunch or dinner when you can eat a breakfast like this? In fact, what I mostly did for other meals while in Stockholm was snack on the nuts, cheeses and sausage I'd brought from home. I was later struck by how thoroughly Swedish officials try to minimize fat in school lunch. The milk offered in cafeterias is .5 percent. And rather than serve butter with the ubiquitous displays of traditional crispy bread, schools are urged to offer margarine instead.

As I mention in part six of this series, school meal recommendations are much more concerned with serving children copious amounts of potatoes and bread. 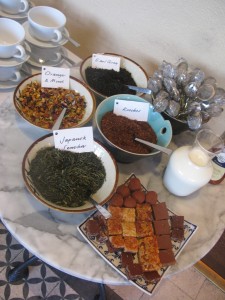 Apparently the reason I was flown to Stockholm on a Saturday, when the press tour didn't start until Tuesday, is that it was cheaper for the Swedish government to put me up in a boutique hotel for two extra nights than to pay weekday air fare. That gave me most of Sunday and all day Monday to sight-see and adjust my inner clock to the six-hour time difference.

I spent most of that time just walking the Stockholm waterfront, which is extensive, since the city is built on a series of islands connected by bridges and water taxis. But I especially wanted to see the Vasa museum housing a 17th century wooden war ship that sank to the bottom of Stockholm's harbor shortly after setting sail on it's maiden voyage. Apparently, after two years in construction, the hull was not designed to carry enough ballast and the ship simply blew over in a strong wind. It filled with water through the gun ports. 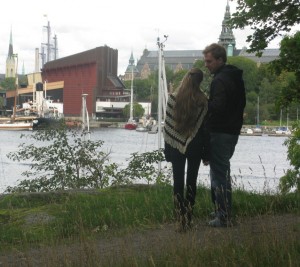 View of the Vasa museum--and romance

A short film explains how the Vasa was accidentally discovered and carefully raised from the briny depths with help from the Swedish Navy in the 1960s. It was then moved to its current location and surrounded by the museum building. The ship is huge, rising more than 40 feet from the waterline at the stern and weighing the equivalent of three jumbo jets. Great pains were made to examine the skeletal remains found on the ship and reconstruct lifelike faces and period clothing.

Many of those on the ship apparently suffered a variety of ailments due to a steady diet of porridge.

Stockholm is among the few large urban centers in Europe that sustained no damage during World War II. Sweden remained neutral while much of the rest of Europe was in flames. Stockholm's old town on the island Gamla Stan--also site of the royal castle--maintains the charm of centuries-old cobblestone streets and colorfully painted townhouses. You can tell this is tourist central from all the stores displaying postcards on the sidewalks and kitch in the windows. Still, it's worth a stroll, and possibly even an afternoon fika--the traditional break for coffee and pastry. 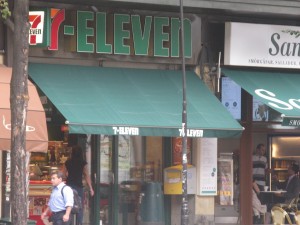 7-Eleven stores are everywhere in Stockholm

America's food influence on Sweden is impossible to miss. There seems to be a McDonald's on every corner, including the one a block from my hotel--in the middle of one of Stockholm's most fashionable neighborhoods--where the Big Mac dinner was priced around $10. In case you needed a candy bar or soda, 7-Eleven was never far away. 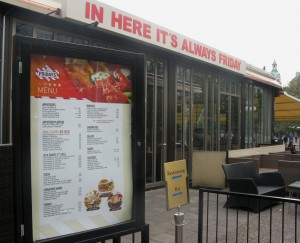 A taste of the U.S. is never far away

T.G.I. Fridays also has a spot close to the downtown waterfront. The "sizzling fajitas combo" sells for $32. Everywhere I went, school officials and chefs complain that the fast food culture makes it hard to get children to eat the healthier food they serve. Sound familiar? 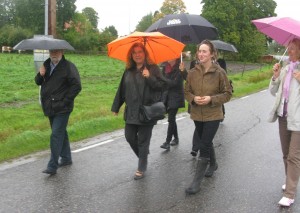 Early Tuesday morning I met up with my fellow journalists--four Germans from Berlin, one Russian based in Prague--and our guide, Kasja Guterstam of the Swedish Institute. Among the Germans was a writer for Slow Food Magazin, another from FOCUS Magazin, a third from Die Tageszeitung, and one gentleman representing a group that advocates for better school food in Germany, Schulverpflegung.

The Germans did not seem terribly impressed with the idea of free school lunch. Why should it be free? they asked. But they were fascinated to here about all the drama occurring around school food in the U.S. Apparently, a national school food program is not something that exists in Germany the way we know it and the journalists I was traveling with--one of whom had lived in Washington--were not seem especially concerned about it. The school day in Germany typically ends early, they explained. Kids eat at home.

They were particularly amused to hear about nutrition guidelines for U.S. schools, and the impending new ones that would sharply cut back on potatoes in favor of green and orange vegetables. "What's wrong with potatoes?" they asked.

Mostly what we did for two days was zip from one meeting to the next--10 in all over two days--in a hired taxi. Our last stop involved a ferry ride to an island-bound organic dairy farm where Arla, the giant Swedish dairy company, pays the farm family to host visits from school groups. Otherwise, we were told, the farm to school concept has not taken a strong hold in Sweden, mainly because schools can't afford to send the kids on farm outings.

We did have our evenings free. One night I decided to splurge for dinner and walked past the McDonald's to a huge department store near the hotel--Nordiska Kompaniet, or simply NK, a cherished institution in Sweden. Along with several restaurants, the store boasts a huge grocery, deli and prepared food department. I spent 74 Swedish Kroner--nearly $12--on a simple microwave meal that turned out to be a rather good version of Thai curried chicken over rice. 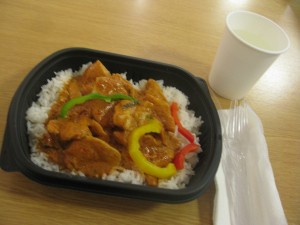 For convenience sake, the store provides e a few eating tables in the prepared food section (also a bar with a full menu), along with a microwave machine, plastic utensils and pitchers of drinking water.

Before leaving the U.S., I had reached out to friends for any contacts they might have in Sweden with school food experience. I was soon corresponding with a number of families there--some American--as well as several of chefs who had learned about my visit through Facebook and other social networking sites and wanted to share their experiences. One of those exchanges resulted in part seven of this series, My Life as a Swedish School Chef.

I got some heat from the Swedes for not painting their school lunch program in glorious hues. But from the many people I corresponded with, I learned that all is not perfect with the Swedish system. It has warts, just like ours. But I was most encouraged to see that the Swedes are not afraid to let their children serve themselves in their "school restaurants," and that so many professional chefs are pursuing careers leading school kitchens. 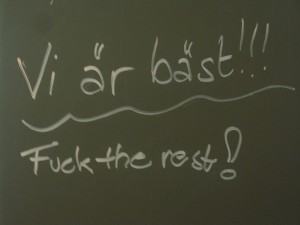 Swedish chefs only boast in private

Apparently, not everyone in Sweden is happy with all the acclaim some of those school chefs have gotten. Chef Michael Backman, at the Annersta School, said he's received no small amount of grief from the school food community because of all the favorable publicity showered on his restaurant-quality school meals. "In Sweden, no one's supposed to be that much better than everyone else." You have to travel deep into the rear of his kitchen to find a blackboard where Backman has scribbled a simple message about the pride he feels in the food he and his staff produce.

"We are the best!" the message declares in Swedish. "Vi ar bast!"

The rest of the message requires no translation.