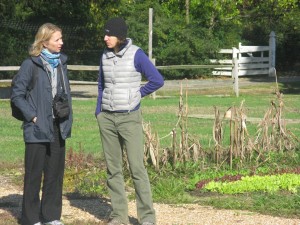 By Ed Bruske
aka The Slow Cook
As part of "Nordic Week" in D.C. Public Schools, one of the people I met on my recent fact-finding mission to Sweden was here in the District of Columbia. Annika Unt Widell, spokeswoman for better school food in Sweden, had flown here to mentor Swedish students who had competed for a chance to take part in food preparation for "Nordic Week."

I wish some of my friends in D.C. schools had thought to invite me for all the work that went on behind the scenes--rolling thousands of Swedish meatballs and preparing some 10,000 pounds of Norwegian salmon for Wednesday's lunch. Annika was anxious to see our farm to school program in action, so on Friday I drove with her to the Arcadia Farm at Woodlawn Plantation. In the photo above, she's conferring with another hero of the school food movement--Andrea Northup--whose brilliant idea it was to form the D.C. Farm to School Network. 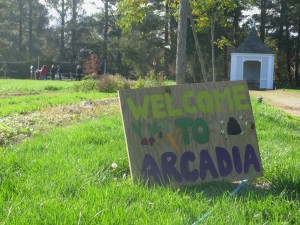 A garden for kids at Woodlawn Plantation

Andrea created the farm to school network two years ago after graduating from college. The idea sparked a movement, drawing hundreds of supporters, including many of the city's non-profits involved in agricultural issues and food access and hordes of chefs anxious to get involved in efforts to improve local school food. My own involvement was accidental: I met Andrea while catering a reception for the D.C. Schoolyard Greening organization and wound up on the network's advisory board. But Andrea doesn't need much advice. She's made this idea work mostly on her own, including finding grant money to fuel the project.

Andrea originally found a home for the network at the Capitol Area Food Bank in northeast D.C. But this year she struck up a partnership with a local restaurant business called Neighborhood Restaurant Group and its foundation arm, Arcadia. They struck a deal with the National Trust for Historic Preservation to start a children's garden at Woodlawn Plantation, a property once owned by George Washington and located just a few miles from Mount Vernon in suburban Virginia. It's called Arcadia Center for Sustainable Food and Agriculture, "dedicated to creating a more equitable and sustainable food system and culture in the Washington, DC area and a collaborative space for the many local efforts and initiatives around better food."

The garden and the staff who tend it now host regular visits from D.C. school children. The D.C. Farm to School Network at Arcadia also retrofitted a bio-diesel-fueled school bus to take garden plants and fresh produce to D.C. schools--a kind of garden on wheels. 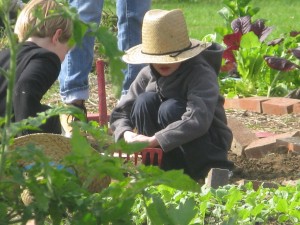 Kids love to dig in the garden

On Friday, the garden was hosting a group of children from the private Lab School. Among the organized activities, kids learn about butterflies and how salads grow. But I think their favorite part is just running around and digging in the dirt with rakes. There are plenty of herbs for kids to touch and smell. Straw hats provided by the garden give the kids a real professional gardener look. 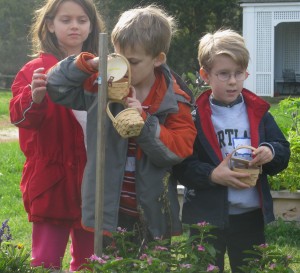 To demonstrate how plants depend on bees and other insects for pollination, the kids get little baskets filled with colored balls of cotton. Their job is to fly around the garden and deposit the "pollen" in baskets hanging from strategically planted wooden posts.

Finally it was time for the children to get a lesson in harvesting greens and vegetables for a salad. They don't need much instruction before they are racing from one raised bed to the next, plucking leaves of lettuce and mustard greens and yanking jumbo-sized carrots out of the soil. 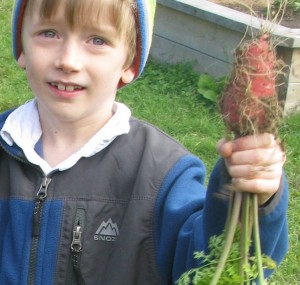 Catch of the day: carrots

My job was to peel and chop carrots and one giant beet for a salad bar. The garden has it's own weather-proof salad bar in the outdoor "kitchen" and eating area. The kids would also get a demonstration in salad and vinaigrette making from a professional chef, before having their turn at the salad bar. 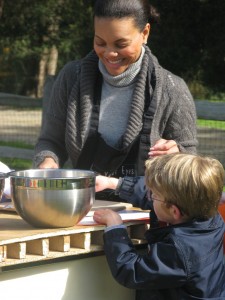 A 7-year-old who knows his salad

We couldn't stay for lunch. Annika had to get back to her hotel and prepare for the flight back to Sweden. But I know she was impressed. They may have universal free school lunches in Sweden, but the farm to school concept has yet to catch fire. Schools there simply don't have the funds to transport children to farms on a regular basis. And that's part of the attraction of Arcadia: it's closer to city schools than any traditional farm, and you don't have to find a farmer willing to take visitors.