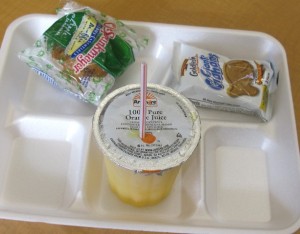 When I first started writing about the food being served in my daughter's elementary school cafeteria, I figured there had to be a reason children were being fed Apple Jacks cereal, strawberry milk, Pop-Tarts, Giant Goldfish Grahams and Otis Spunkmeyer muffins for breakfast.

I was right. The manufacturers of those sugar-laden products pay hefty rebates--some call them "kickbacks"--to giant food service companies as an inducement to purchase their highly processed goods. But I have now learned it's not just the lousy food that's fueled by rebates. Just about everything that goes into running a public school cafeteria comes with a rebate check that helps make sure the industrial version of food wins out.

In what may be the first ever detailed look into how industry rebates dominate school food service, documents I obtained under the Freedom of Information Act indicate that more than 100 companies paid rebates in recent years to the food service management company hired by D.C. Public Schools--Chartwells--for everything from breakfast cereal, hamburger patties and canned green beans to paper cups, armored car services and drug counseling for employees.

Far and away the biggest contributor to the rebate dollars collected by Chartwells was a company I had never heard of, but one that apparently plays an oversized role in feeding our city's children--Performance Food Group. According to an itemization released by D.C. Public Schools, Performance Food Group paid more than $400,000 in rebates for goods and services supplied to the city's schools over the last three years.

Based in Richmond, Va., Performance Food Group claims to be "one of the nation's largest foodservice distributors" with multiple brands and more than 1,000 products aimed not only at schools and restaurants but "every kind of eatery from coast to coast." The company has operations in 29 states, "from our distribution warehouses in Tennessee, to our seafood facility in Miami, to our cheese processing facility in Minnesota." It employees 10,000 workers just to transport all of its goods, and its trucks "log millions of miles each year," according to the company's website.

Manufacturers pay rebates based on large volume purchases--literally, cash for placing an order. Rebates are said to be worth billions of dollars to the nation's food industry, although manufacturers as well as the food service companies who feed millions of the nation's school children every day--Chartwells, Sodexo and Aramark--treat them as a closely-guarded secret.

The U.S. Department of Agriculture requires that food service companies engaged in "cost reimbursable" contracts with schools credit any rebates they receive to their school clients. For more than a year, attorneys for D.C. Public Schools refused to make public an itemized list of rebates collected by Chartwells, claiming the information constituted "trade secrets." The schools were overruled by Mayor Vincent Gray's legal counsel after I filed an administrative appeal.

John Carroll, an assistant New York State attorney general investigating rebating practices there, has said rebates pose "an inherent conflict of interest" in school feeding programs because they favor highly processed industrial foods. In cases where schools pay a food service company a flat rate to provide meals, the companies are not required to disclose the rebates they collect. In those cases, Carroll recently told a U.S. Senate Panel, rebates tend to drive up the cost of food, cheating children out of nutrition they might otherwise have on their lunch trays.

Carroll also described cases where rebates discouraged the use of local farm products in school meals. Produce vendors can't afford to pay a rebate for local apples. But in at least one case, a produce distributor raised the prices of his goods so that he could pay a rebate to a food service company.

A Homeland Security sub-committee in the U.S. Senate is investigating possible rebate fraud in contracts across the entire federal government.

Here in the District of Columbia, children were being fed meals manufactured in a suburban factory until Chartwells in the fall of 2009 introduced something it called "fresh cooked." As I discovered while spending a week in the kitchen at my daughter's elementary school, what that entailed was reheating pre-fabricated meal components such as chicken nuggets and tater tots. For breakfast, children were often consuming up to 15 teasoons of sugar in the form of processed cereals, flavored milk, cookies and muffins.

Around that same time, D.C. Public Schools hired a new food services director, Jeffrey Mills, who scoured the entire Chartwells menu item-by-item, removing the flavored milk and processed treats and replacing many of the familiar re-heated lunch items. Funds allocated by a "Healthy Schools Act" approved by the D.C. Council helped pay for fresh local fruits and vegetables. But Mills said he sometimes encountered stiff resistance from the local Chartwells manager because the products Mills wanted to serve were not on Chartwell "preferred" product list.

According to Carroll, site managers for food service companies face punishment from their employers if they deviate from products that pay the biggest rebates. Rebates are extremely lucrative, since they generate revenue that requires virtually no labor. Some products trigger rebates of up to 50 percent of their listed value. And while USDA regulations require that rebates be credited to schools with "cost reimbursable" contracts, it is believed that the big food service companies have found ways to profit from them nonetheless.

For instance, it is speculated that manufacturers offer stepped-up rebates for very large purchase orders. Thus, while a single school district may only be entitled to 10 percent worth of rebates on its share of breakfast cereal, an order for cereal covering multiple school districts might trigger a rebate of, say, 20 percent. The food service company would simply pocket the difference.

Chartwells manages food service in more than 500 school districts across the country. The products it uses are supplied by a sister company called Foodbuy, whose employees concern themselves entirely with writing huge contracts with food manufacturers and collecting the rebates on behalf of their parent company, Compass Group, based in Great Britain. Compass group, which owns numerous food service operations in this country--including Chartwells, Bon Appetit, Restaurant Associates, and Wolfgang Puck Catering--claimed some $22 billion in sales in its most recent annual report.

In July of last year, I disclosed that Chartwells had collected more than $1 million in rebates and discounts during its first 18 months of operation in D.C. schools. Subsequently, the schools acknowledged that they had been waiting nine months for Chartwells to make good on a request to produce an itemized accounting of where those rebates came from.