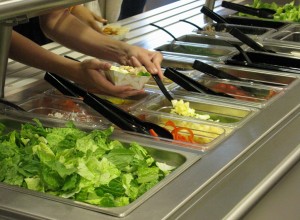 Over the last several months I've been meeting with D.C. school officials and now it can be revealed: We have a new wellness policy that prohibits flavored milk and sugary cereals, requires that all children have at least 30 minutes to eat their food at lunch, limits classroom celebrations to just one per month and mandates that all food served on school grounds--including vending machines, school stores, bake sales and other fundraisers--comply with HealthierUS School Challenge gold-level standards.

Congress in 2004 mandated that all public schools must have a wellness policy in place that sets goals for nutrition education and physical activity and establishes guidelines for the food available during the school days. The federal law also requires that schools involve parents and students in developing the wellness policy. But it doesn't give precise directions on how this is to be done, so parents in too many cases have been frustrated in their efforts to make wellness policy changes.

The policy is supposed to be updated every three years.

Fortunately for us in the District of Columbia, we now have a food services director--Jeffrey Mills--who would like nothing better than serve the kind of food Alice Waters would be proud of. I was pleasantly surprised at how open the process of revising our wellness policy was--even though I didn't get everything I wanted.

For instance, I pushed for a policy that would have prohibited children bringing sodas or sugary beverages from home to drink with their lunch in the cafeteria. But Mills and others thought the community wasn't ready to go this far. They favor a "go slow" approach to avoid controversy. They did include language saying "schools will encourage teachers and families to not bring soda and other beverages high in sugar content on school grounds, including in student lunches from home."

My fellow committee members were also leery of lecturing school staff on what they eat. But we did approve a bullet item stating that "school staff should be encouraged to model healthy eating habits for the students," meaning employees "are strongly encouraged to not consume frood in front of students that do not meet" the HealthierUS School Challenge standards.

Since I first exposed what Chartwells was serving in D.C. cafeterias, school food service has seen some dramatic changes. A "Healthy Schools Act" approved by the D.C. Council established extra funding for meals that include local produce. Mills, after being hired in late 2009 as food services director, undertook a massive overhaul of the Chartwells menu, eliminating flavored milk and sugary cereals and other treats such as Pop-Tarts, Giant Goldfish Grahams and Otis Spunkmeyer muffins. Kitchen workers received extra training, and they now make some meal entrees--such as lasagna--from scratch.

D.C. also pays for a free breakfast for every child that wants one. In elementary schools where more than 40 percent of students are considered low-income, breakfast is served in the classroom. The city also now pays for children who normally would be eligible for a "reduced price" lunch to get theirs free. D.C. Public Schools operates a city-wide supper program for kids who stay late, and further subsidizes meals with $6 million or more in annual deficit spending.

Still, when a school district contracts with a big food service company like Chartwells or Sodexo or Aramark, it should expect to see meals comprised largely of processed frozen foods. The level of oversight Mills and his team brings to bear is unusual. They are now trying to place salad bars in all 121 of the schools under their jurisdiction. (Charter schools operate independently. Indeed, they are each required to draft their own individual wellness policies.)

As we are learning, however, drafting a policy and seeing it actually take effect can be two different things. For instance, in our last meeting we learned that while schools are required to provide at least 30 minutes of physical education for all primary grades, and 45 minutes in senior schools, some principals have instructed their PE teachers instead to have the kids read, to boost test scores. In fact, the school officials at the table urged me and other community members that the best way to address problems like that may be for us to draft a letter to the schools chancellor. Apparently, working up the chain of command doesn't necessarily get results.

Yet under "Healthy Schools," kids beginning in 2014 are supposed to be getting five times as much PE--150 hours per week in elementary school, 225 minutes per week in grades six through eight.

Similarly, although the wellness policy states that every child should have at least 30 minutes to eat lunch "after the last student passes through the line," I don't know of any school where that currently is the case. Especially in schools with high enrollment of low-income children, who tend to take the federally subsidized meal rather than bringing one from home, those lunch lines can be very long. In my daughter's elementary school last year, for instance, the lunch period was only 30 minutes long, and the last kid who went through the line typically did not have much more than 15 minutes to eat.

Woodrow Wilson Senior High School in far Northwest Washington has some 1,600 students, yet only one lunch period for its undersized cafeteria. Lunch is said to be pure chaos.

Next on the agenda for the wellness committee may be figuring out how the school can arrange training sessions for staff so that they actually know what's in the policy and what they need to do to comply with it. Federal rules require that the wellness policy be distributed to staff and made easily available to the public, such as by posting it on school websites and keeping copies for public inspection in the school office.

Other highlights: nutrition education that integrated into other content areas such as math, science, language arts and socials studies and teach "media literacy with an emphasis on food marketing." Schools must provide at least 20 minutes of recess daily, and it should come before lunch "whenever possible." Schools are required to increase participation in meal programs through a "coordinated, comprehensive outreach plan" that builds community coalitions and may include after-school cooking clubs for families, parent workshops and community/school gardens.

Under the federal mandate, we are also required to figure out a way to collect data and masure the impact of implementing the wellness policy. In other words, we still have our work cut out for us.