How Rebates Keep Local Produce Out of Schools 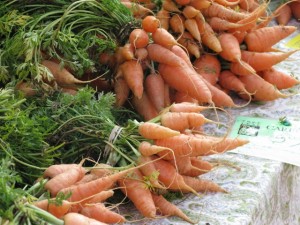 No rebates for local carrots?

Just in time for Farm to School Week, the state prosecutor investigating fraud in school food rebates in New York yesterday told a U.S. Senate panel how the industry practice of awarding rebates to food service providers for large volume purchases discourages the use of local farm goods in school meals.

"In fact in one instance I observed that a local produce wholesaler increased the prices it charged to the school district for fresh produce, including locally grown produce, so that it could pay the food service company a rebate," Carroll said in his prepared testimony. "In that same market I also observed that the local site manager found it difficult to meet buy local requirements and still comply with the food service company requirement that the vendor pay rebates."

Carroll said the managers who operate local school food operations on behalf of large food service companies face "tremendous pressure" from the parent company to buy products only from suppliers who pay rebates. "So for example, the local site manager wanted to try to buy apples from a local grower directly, but felt pressure not to do so, because the local apple grower could not pay rebates on par with what the food service company expected based on expectations from larger food vendors."

New York last year collected $20 million from the giant food service company Sodexo after it alleged that the company had failed to credit schools and other state government clients for rebates it collected from manufacturers. Since 2007, the U.S. Department of Agriculture, which oversees the national school meals program, has required that rebates collected by companies such as Sodexo, Chartwells and Aramark engaged in "cost reimbursable" contracts with schools be passed along to the schools.

New York State has had the same requirement in place since 2003.

His investigation continues. This week a Suffolk County-based company--Whitsons Culinary Group--agreed to pay the state and 30 schools $1.6 million for rebates it failed to pass along to those clients, according to the New York Daily News.

Subpoenas have been issued to 10 food vendors as part of the probe, the Daily News reported.

Companies engaged in "fixed rate" contracts with schools are permitted to keep the rebates they collect, although Carroll said that practice disguises the actual costs of operating school cafeterias and denies children nutritional food they might otherwise have on their trays.

Carroll testified that "to the extent that it is difficult to determine or there is obscurity as to the true value of the food going into the final meal, the more difficult it will be to be certain that school children or our soldiers in the field are getting a healthy meal that they will actually want to eat."

Manufacturer rebates are called "kickbacks" by some because they involve secret arrangements between buyers and sellers that do not appear on invoices or in annual corporate reports. It's an area of food service treated as a closely-guarded secret by the industry. Carroll said rebates were hardly a factor in school meals before 2000, but have since become rampant. A Senate Homeland Security subcommittee is investigating the implications of rebates on contracts affecting the entire federal government.

Carroll said rebates typically amount to 10 to 15 percent of all purchases made by food service providers for school meals in New York. My own investigation here in the District of Columbia revealed that Chartwells claimed it had collected more than $1 million in rebates during the first 16 months of its contract with D.C. Public Schools. But that represented only five percent of Chartwells' total purchases, according to invoices I obtained through the Freedom of Information Act.

Carroll said rebates represent "an inherent conflict of interest" in school food service, placing monetary interests ahead of the nutritional needs of children.

John Carroll discussed his investigation into rebates at length before a gathering of the School Nutrition Association earlier this year. You can see a video of Carroll's remarks here.