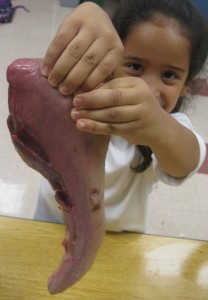 Kids love playing with their food

In the five years I've taught my "food appreciation" classes at a private elementary school here in the District of Columbia I've never gotten a call from my boss like the one I got yesterday.

She'd heard I'd been teaching the kids about beef tongue. In fact, I had two tongues brining in the milt-purpose room fridge. Both she and her supervisor, she said, were worried about the reaction they might get from parents. Maybe, she suggested, she should be keeping a closer eye on what I'm doing.

Until now, there's never been a controversy over my "f0od appreciation" curriculum. Among the goals of these classes is to teach kids about foods they may not have been exposed to previously, about the roots of our foodways, about food cultures in other countries, about making food by hand and eating more sustainably. Since we currently are sampling the cuisine of the British Isles, where offal such as beef tongue has a long and proud tradition, I saw this as the perfect opportunity to teach the kids about eating the whole animal. Cows, they should know, were not put on the planet just to provide hamburger patties.

There are also a number of sustainability issues attached to eating beef. I happen to believe that raising beef on factory farms (confined animal feedlot operations, or CAFOs) is a bad idea and destructive to the environment. But I also believe that animal protein has an important place in the human diet, and that ruminants fit quite nicely into the agricultural landscape, especially when raised on pasture where cultivating vegetable crops may not be practical.

The most popular meat in the world is goat, a food source that may prove vitally important on an overheated planet.

As a food educator, I believe we should be raising sustainable eaters. We need to remind kids that there are many other edible parts of the cow besides the chuck and the T-bone steak. I want them to see, smell and touch foods that may be foreign to them. And guess what? They loved holding the beef tongue, the same way they've handled chicken livers, raw fish and squid. (At least the younger kids did).

My boss, meanwhile, is bracing for the worst.