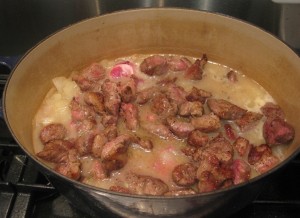 Getting Irish stew ready for the oven

Even after five years working with the kids in my "food appreciation" classes, I am still occasionally bowled over by their reactions to certain foods. This week they dove into the process of making a classic Irish stew. They were not at all grossed out by the site of lamb being sliced and diced. On the contrary, they wanted to touch it, feel it, love it. And they were swept away by the final dish. They adored it.

And what's not to like? The aroma of lamb browning on the stove top got the attention of everyone who passed by the multi-purpose room. If I do say so myself, the final dish was superbly delicious.

The original Irish stew apparently consisted of lamb plainly cooked in water with potatoes. To kick the flavors up a notch or two, we browned our meat--lamb shoulder, purchased with the bones in and cut by the butcher into 1 1/2-inch thick chops.

We trimmed the meat away from the bones and cut it into 1-inch cubes. Season the lamb with salt and pepper, then brown it in batches in a heavy pot or Dutch oven liberally greased with your favorite cooking oil. The pieces of meat should not be touching--give them some room. You want to brown them, not steam them.

Remove the meat to a bowl. The bones, meanwhile, can be spread on a baking sheet and browned in a 450-degree oven. Most likely, the bones will have a fair amount of meat on them. All the better to flavor the stew. You can easily pick the meat off later, when the stew is finished.

Add more cooking oil to the pot if necessary and add three medium onions, roughly chopped. Over moderately high heat, cook the onions, stirring and scraping any bits of meat off the bottom of the pot, until they are tender and lightly browned. Toss in 1/4 cup all-purpose flour and mix well with the onions. Slowly pour in 3 cups water, allowing the mix to come to a boil. Season with 1 teaspoon salt and place the meat and bones in the pot, along with a few sprigs of fresh thyme (or 1 teaspoon dried thyme leaves). Push the meat and bones with the back of a wooden spoon into the onion broth. When it has returned to a boil, cover the pot again and bake in a 300-degree oven for 1 hour.

To serve, stir all the ingredients in the pot together with the broth. Remove bones, carefully picking them over for meat that you can return to the stew. Ladle into warm bowls and present at the table with a loaf of hearty whole-grain bread and plenty of butter.