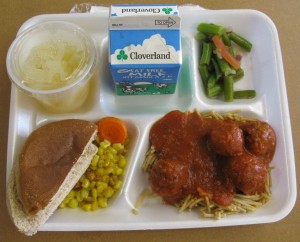 How does your school lunch stack up?

Just in time for National School Lunch Week, the anonymous school lunch blogger Mrs. Q last week unmasked herself on Good Morning America and released a new book recounting her experiences eating lunch in a Chicago cafeteria every day for a year.

Special education instructor Sarah Wu--her real identity--captured the imagination of thousands of internet readers with her lurid photos of truly awful school grub. All the recent attention brought out school lunch defenders such as Diane Pratt-Heavner of the School Nutrition Association, a group representing school cooks across the country as well as the processed food companies that supply them.

"We have seen a tremendous change in the cafeterias in what they are offering and what they are promoting," Pratt-Heavner was quoted as saying in USAToday. Wu's story, she said, is "one snapshot in one school across the country." Pratt-Heavner suggests that parents need to get out to their local cafeteria and see what's happening.

We'll, I've gone one better. I've already been sitting in on breakfast and lunch daily at my daughter's school here in the District of Columbia and seen some of the changes that took place when a new food services director finally brought Chartwells, the giant food services management company, to heel. Having spent a week in an elementary school kitchen here in D.C. and documented the junk Chartwells was serving, I then took off for other parts of the country, living for a week in a school kitchen in Berkeley, then a week in Boulder. I also took up residence in a "boot camp" outside Denver where lunch ladies had the processed chicken nugget routine drilled out of them and learned to cook from scratch.

Of course those Berkeley and Boulder meal programs are some of the best in the country, having been done over by Ann Cooper. I'd love to continue this school lunch safari by documenting the work being done in some other school kitchens. But it's a funny thing: Most school officials apparently are just too embarrassed to have a journalist who really knows something about school food actually witnessing what goes on behind the scenes. Imagine, a program that feeds some 32 million kids every day but operates in virtual secrecy.

So last week I issued a challenge to the School Nutrition Association and I repeat it here to every school district in the nation: Give me a chance to spend five days in one of your kitchens, with no gags on the lunch ladies and freedom to roam the cafeteria and photograph the food and I will travel anywhere in the country at my own expense. I really do want to see how schools are making all the improvements Diane Pratt-Heavner told USAToday about. I want to tell the world and celebrate the work your schools are doing.

Just e-mail me at euclidarms(at)yahoo(dot)com.

This is my contribution to National School Lunch Week. So far, I have not heard back from the School Nutrition Association. But I hope you will take me up on my offer.