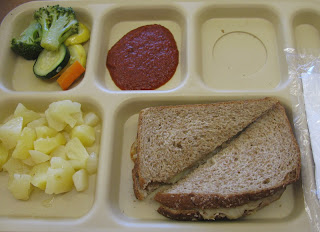 I'm always captivated by the different ingenious approaches kids routinely take toward the food their served in school. Some things, for instance, simply do not lend themselves to being eaten by a plastic spork. Other foods inspire the most creative improvisation, sometimes involving a complete deconstruction of what the menu writer and kitchen cooks intended. 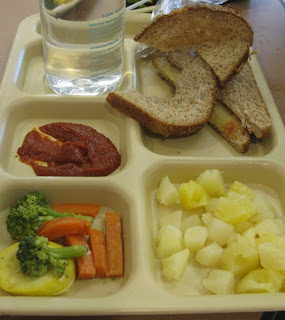 Some of the kids took this as a challenge. As you see here, one girl who described the bread as "nasty" pulled the sandwich apart and dove for the cheese. I watched this become quite a project as the girl attempted to separate the melted cheese as much as possible from the bread, to which it was determined to adhere. 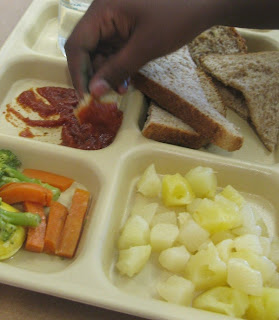 But she was largely successful. And here's where the "tomato dipping sauce" entered the picture for her. She dipped the cheese in it. Perhaps this was vaguely reminiscent of pizza for her. 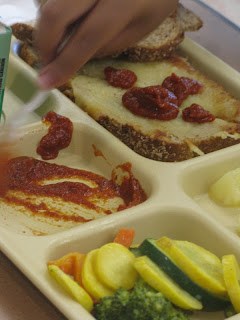 And here's one fifth-grade boy's solution. He opened the sandwich and spread the tomato sauce over the cheese. Suddenly, things are beginning to look a whole lot more like pizza.
And in case you're wondering, the vegetables were fresh and delicious. Unfortunately, kids don't go for vegetables much. Some were picking at the zucchini, while others bargained with their table mates for the broccoli. Still, it sure beats the cooked-to-death broccoli we've seen in the past.
Posted by Ed Bruske at 7:06 AM