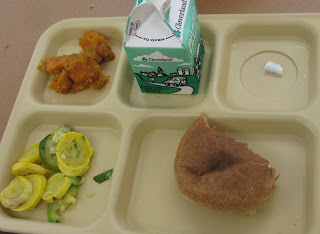 Chartwells on its menu website described this as a "roasted Cuban turkey sandwich with Swiss on a whole wheat roll" with "fresh locally grown cucumber coins" and "locally grown sweet potato salad."

A Cuban sandwich traditionally is made with roast pork, Black Forest ham, Swiss cheese and pickles, all heated and crushed between two slices of Cuban bread in a panini press or something like it. This, is other words, was a very rough approximation. But who's complaining?

The local cucumber coins turned out to be steamed zucchini and yellow squash: no problem with that substitution. I don't know if I'd go so far as to call those sweet potatoes a salad. In fact, I do make a terrific salad with roasted sweet potatoes, pecans, raisins and other stuff tossed with a maple-flavored vinaigrette. These look more like cooked sweet potatoes.

The schools score big points for the local vegetables, and in fact receive a five-cent bonus from the District for any lunch meal that contains a locally grown component. The only trouble is that kids don't really like vegetable side dishes for the most part, and they really didn't eat much of this either. The commercial hummus is quite good. It comes from Kronos Greek Specialties in Glendale Heights, Ill.