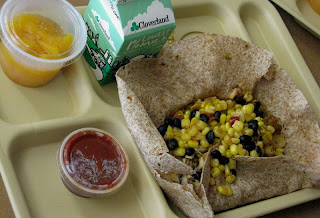 The menu also called for "Southwest pinto beans," so I suppose you'd have to count the black beans as a substitution. On the side is a "salsa cup." I heard one girl remark, "I really like the salsa," but I didn't get a chance to taste it.

Would this qualify as one of those instances of over-hyping a menu?

The menu also called for a "locally grown apple," but this looks more like canned peaches. Since the schools receive an extra five cents for every lunch meal that contains a locally grown product, I wonder how they account for meals that say they're supposed to have a locally grown piece of fruit but then don't deliver. 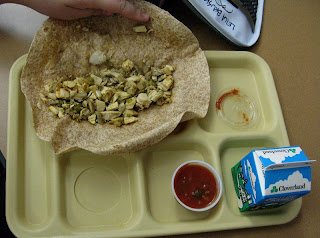 In case you were wondering where the chicken was on this chicken fajita, some of the kids opted not to take the corn and beans, revealing the chicken underneath. This is diced chicken that arrives at the schools pre-cooked and frozen. Add the salsa and I suppose it wouldn't look so plain. 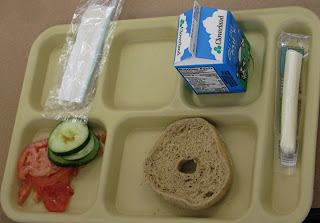 Here's the alternate for Mondays: a whole wheat bagel with sunflower butter, string cheese and "marinated tomato and cucumber salad." The vegetables sure brighten up this tray, but I don't see much marinade. If you were a kid, would you eat this?
Not pictured: the sunflower butter and the other half of the bagel. Maybe it was being eaten when I snapped this photo.
Posted by Ed Bruske at 12:30 PM