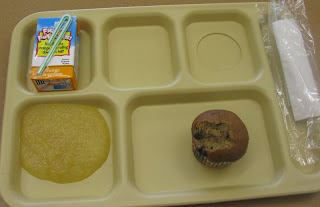 Breakfast doesn't get much simpler than this: a muffine, apple sauce and orange juice.

Chartwells at its menu website called for "whole grain apple cinnamon breakfast bar," so I suppose the muffin was a substitution. I rarely look at the menu before we arrive at school, so I'm not expecting anything in particular. Still, the kitchen ladies usually tell me when they're "off menu." They're pretty flustered when that happens. Should they be?

My beef with school menus isn't that they don't match, exactly, what's being served. It's the hyperbole and gamesmanship that's deployed to make the food sound better than it is. Why not just call the food what it is, rather than try to make it sound like the schools are serving something they're not.

The lesson is, you can't judge school food by the menus. The only thing that counts is what actually shows up on kids' trays. Fortunately, the food in D.C. schools has gotten much better. Could it be better still? Absolutely. But what, exactly, is our measure for good school food?
Posted by Ed Bruske at 6:00 AM