What's for Lunch: Symphony of Browns 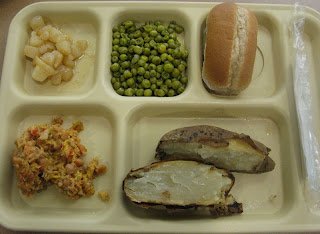 Some of us believe that the current childhood obesity epidemic is simply slow death brought about by too many sugars and starches in the diet. But the U.S. Department of Agriculture loves starches. In fact, grains and other starchy foods form the foundation of the Dietary Guidelines for Americans as well as the famous federally-sponsored food pyramid.

Thus, a school lunch such as this one served yesterday at my daughters school can be dominated by starches in the form of a baked potato as the featured entree, accompanied by something Chartwells calls "vegetable chili"--meaning beans that qualify as a "meat alternate" under USDA guidelines--a bread roll, canned peas and "warm baked locally grown apple slices" that look more like diced apples to me.

What do you suppose the glycemic load of this meal would be, especially for a 5-year-old?

Fortunately, perhaps, kids showed very little interest in the "vegetarian chili" or the peas or in many cases the baked potato. "It's dry and it's burned," said one fifth-grader of the spud on her tray. But my daughter gladly snatched it up. "All it needs is salt and butter," she declared.

Clearly, this is one case where the USDA regulations are not aligned with the country's weight issues.
Posted by Ed Bruske at 7:39 AM