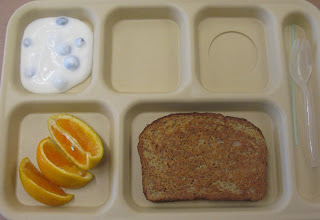 Chartwells calls the Stonyfield vanilla yogurt in this photo a "dipping sauce" to go with the French toast. As you can see, there are also some blueberries in that yogurt, but I didn't see any of the kids dipping their French toast into it.

This, however, is a big change from last year when the accompaniment to the French toast would have been a tub of high-fructose corn syrup mascarading as "pancake syrup." There's still sugar in the vanilla yogurt for sure, but not nearly the jolt delivered by that HFCS.

As best I can determine, the French toast is made from scratch using "whole wheat" bread and liquid eggs. It's a bit dry, but still palatable. Kids love almost anything having to do with bread. The pre-sliced oranges are also a helpful innovation. Not only are whole oranges difficult for the kids to peel, but so often they only eat a small portion before throwing it in the trash, just as they do with those huge Red Delicious apples schools love so much to serve.

We've been seeing smaller, more kid-size apples on the cafeteria trays lately. Very smart. When I spent a week in the central kitchen in Berkeley, CA, I learned that the schools there had contracted with a local orchardist to receive his less-marketable small apples. They may not sell so well at the farmers market, but they are just the right size for a kid's lunch.
Posted by Ed Bruske at 6:00 AM