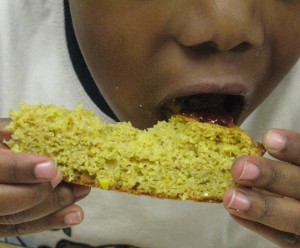 Who doesn't like a slice of warm corn bread?

The baking lessons in our food appreciation classes turn to making quick breads and teaching kids the difference between yeasted breads and those made with a chemical rise. Not everyone has time to wait for yeast to work its magic on bread. Hence bakers turn to a chemical reaction between a dry ingredient such as baking soda and a wet ingredient such as buttermilk. The baking soda, which is alkaline, reacts with the acid content of the buttermilk to create a kind of frothiness to the batter. Think of what happens when you drop an Alka Seltzer tablet in a glass of water.

Another common rising agent is baking powder, consisting of baking soda and an acid salt such as cream of tartar already mixed in. For our lesson this week, I chose to make a corn bread that happens to use both baking soda and baking powder. This is a classic corn bread recipe with an upscale twist: beaten egg whites are folded into the batter to give the bread even more lightness, although this is nothing like the cakey, sweet "corn bread" you might be used to.

This is the kind of corn bread you might serve for a special Sunday supper. We served it a choice of all-fruit strawberry or blueberry jam.

In a large mixing bowl, combine dry ingredients. In a large measuring cup or bowl, mix buttermilk, egg yolks, creamed corn and melted butter. (I melt the butter in the iron skillet in the oven, which has the added virtue of greasing the skillet. Simply pour the butter, once melted, into the measuring cup with the other wet ingredients, then put the skillet back in the oven to heat up again.)

Meanwhile, pour wet ingredients from measuring cup into dry ingredients and mix until just incorporated. Then fold in the beaten egg whites. Pour the mixture into the hot skillet. If the batter bubbles around the edges, you know you are on the right track. Place the skillet in the oven and bake until the top of the corn bread is lightly browned and a toothpick inserted into the middle comes out clean, about 30 minutes.