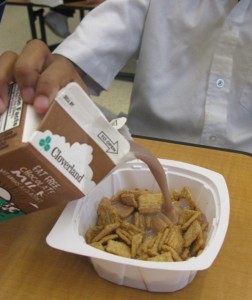 A little sugar with that calcium?

A landmark study on calcium and vitamin D nutrition recently published by the Institute of Medicine poses a serious challenge to a dairy industry campaign to sell chocolate milk to the nation’s school children, finding that only girls aged 9 to 18 might need more calcium and only by an amount contained in a half-serving of calcium-fortified cereal .

In setting new dietary standards, the IOM found claims that Americans are deficient in calcium and vitamin D to be greatly exaggerated. But the dairy industry has spent millions of dollars promoting sugary flavored milk in schools based on the idea that children are threatened with a “calcium crisis.” The industry is fighting efforts to remove flavored milk from school menus, saying kids will be in danger of not getting the calcium they need to build strong bones.

Meanwhile, a growing body of scientific evidence links sugar with an epidemic of childhood obesity as well as a host of related health problems: diabetes, hypertension, heart disease and even an unprecedented outbreak of non-alcoholic fatty liver disease in children.

According to the IOM, girls leading up to and during puberty typically consume around 823 milligrams of calcium daily. Because they experience a growth spurt during this period, they should aim to get about 200 milligrams more calcium, or “between 1,000 and 1,100”milligrams, said Dr. Steven A. Abrams, a professor of pediatrics at Baylor College of Medicine who specializes in the calcium intake of children and was one of the panelists who wrote the IOM report.

By comparison, a one-cup serving of Total cereal contains 1,000 milligrams of calcium, a cup of low-fat milk around 300, and a half-cup of cooked collard greens 200, about the same as in a single serving of string cheese.

“I’ve never been a fan of the term ‘calcium crisis.’ I’m much more in favor of policies that ensure we meet that 1,000 milligrams,” said Abrams. “What we need to do is make sure that we have a lot of different ways for kids to get to it.”

Sources of calcium besides milk, cheese and yogurt include fortified cereal and fruit juice, as well as certain green vegetables, such as bok choy, broccoli and collard greens. Dairy products contain more calcium, but the calcium in vegetables is more readily absorbed.

Abrams declined to address the question of using sugar and flavorings to entice children to drink milk at school, saying “people have different perspectives,” and noting that he sits on a board that advises MilkPEP, the dairy group responsible for the “Got Milk?” and “Raise Your Hand for Chocolate Milk!” campaigns.

But a leading medical voice on the dangers of sugar, Dr. Robert Lustig, a professor of clinical pediatrics at the University of California at San Francisco specializing in endocrinology and obesity, said schools should not be offering flavored milk to children. “But it won’t get fixed any time soon,” Lustig said. “The dairy industry is very tight with the USDA.”

The IOM report created a sensation when it was released in November because it debunked rampant promotion of vitamin D supplements as a treatment for everything from cancer to arthritis to diabetes. The IOM panel said there was no scientific basis for those claims and found that calcium supplements also are not necessary. Their report, based on a review of more than 1,000 studies and testimony from medical professionals, constitutes the most authoritative dietary recommendations on calcium and vitamin D to date.

Calcium and vitamin D working in tandem are essential to skeletal health throughout life. Vitamin D actually acts as a hormone, enabling calcium in its job of building and “remodeling” bones, as well as performing vital functions elsewhere in the body. In fact, there is very little study of how much calcium and vitamin D are needed independent of each other. Complicating the task of setting dietary requirements , the IOM panel said, is the fact that as well as being contained in some foods, such as oily fish and egg yolks, vitamin D is synthesized by the skin from sunlight.

Most Americans don’t consume enough vitamin D in theory, but measurements of the hormone in their blood consistently show they have more than enough, indicating they get at least some from sunshine, the panel reported.

Also unknown is the minimum amount of calcium needed for healthy bone growth. Abrams said some experts put the number as low as 600 milligrams in pubescent girls. But he said the IOM panel “chose not to set a minimum number.”

The committee took a more cautious route, adopting 1,100 milligrams of calcium daily as the “estimated average requirement” for all children aged nine to 18, meaning the amount that would ensure that at least half the children in that age group get the calcium they require. But because genetic differences can affect how well some people’s bodies utilize calcium, Abrams said the committee went a step further and established 1,300 milligrams as a “recommended dietary allowance” that would cover 97 percent of all children in the group.

Well-designed studies of children’s calcium intake and its effect on bone health are scarce. One study cited by the panel found that while children who were given extra calcium did show increased bone growth, it did not last after the supplementation ended.

The IOM report makes no mention of bone impairment being suffered by children not getting enough calcium or vitamin D outside the rare cases of rickets experienced by infants, typically those with dark skin who are breastfed. Breast milk contains less vitamin D than infant formula and dark pigment inhibits the skin’s ability to synthesize sunlight.

Milk sold commercially is fortified with vitamin D. Exactly how much calcium children consume or where they get it isn’t known, although some surveys have attempted to establish a rough idea. For many children, the federally-subsidized meals program, where milk is a required element at breakfast and at lunch, is an important source of calcium and vitamin D—at least when school is in session.

The 2007 School Nutrition Dietary Assessment Study published by the USDA found that the mean 24-hour calcium intake among middle-school students was 1,137 milligrams—or well within the acceptable range—for those who participated in the meals program, but 906 milligrams—less than the amount recommended—for children who ate outside the subsidized lunch line.

The USDA reports that children who participate in the federally-subsidized lunch program are four times as likely to drink milk at school than other children.

A “study” commissioned last year by the dairy industry, and performed by a company that conducts marketing research for corporate food clients, suggested that 35 percent fewer elementary school students drank milk when flavored milk was removed from the cafeteria. But the dairy industry has refused to release the full study, and some experts have dismissed it as inherently biased.

Estimates indicate that anywhere from 60 to 70 percent of all milk consumed in schools is chocolate or another flavor with added sugar. An eight-ounce serving of chocolate milk, for instance, typically contains about 14 grams of high-fructose corn syrup, the equivalent of three and a half teaspoons.

According to Lustig and other anti-sugar activists, the dangers of sugar in the form of fructose outweigh any calcium or vitamin D benefits children might get from drinking flavored milk.

Beginning in fall 2010, schools in the District of Columbia ceased serving flavored milk, following districts such as Berkeley, Calif., and Boulder, Co. The state board of education in Florida also has been considering such a move, but recently was asked by the state’s newly appointed agriculture secretary to put that decision on hold pending further study.