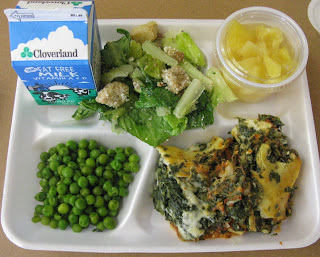 Behold the beautiful lasagna "homemade" in the kitchen of my daughter's elementary school here in the District of Columbia by the kitchen manager, affectionately referred to as "Mrs. G."

"Mrs. G" has been working in school kitchens for 23 years and does know a thing or two about making food from scratch, even though that definitely has not been the drill in D.C. schools in recent memory. Since Chartwells took over food service three years ago, she now works for Chartwells.

The lasagna was introduced this year. Lately, I have been eating the food myself. I haven't dared before--there are just too many carbs in school food for me. But in addition to recording what the food looks like and how the kids react to it, I thought it was high time I knew how it tasted as well.

I can now announce: the lasagna is divine. Okay, it's not the lasagna with bechamel sauce I would make at home. This lasagna calls for frozen spinach, prepared tomato sauce, no-boil noodles and commercially grated mozzarella cheese. Still, a superb effort I would say.

The peas, lightly cooked from the frozen state, also were delicious, as was the Caesar salad. It even came with little croutons. The dressing, I'm told, was a "light Italian," not really Caesar. Still, it was dusted with Parmesan cheese.

I can't vouch for the food service all of D.C.'s schools are getting from Chartwells. I'm limited to visiting my daughter's school, and they may be making a special effort there because they read this blog. But some days I am impressed by what the kids are seeing on their trays. 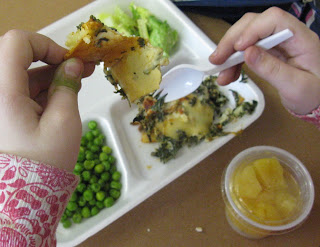 Then I noticed my daughter doing something odd with her spork. She was picking up pieces of the lasagna noodles and scraping at them. Then I realized: she was scraping away all the spinach.

Some adults have this fantasy that if we just give kids real vegetables, they will light up like Christmas trees and eat healthfully ever after. Obviously, adults don't' understand the lengths some kids will go to avoid vegetables and other "healthy" foods.

This reminds me of the story my daughter told last year about what the kids did with the raw cucumber slices that were delivered to their classes as snacks: They liked to stomp on the bags of cukes and "turn them into slush." 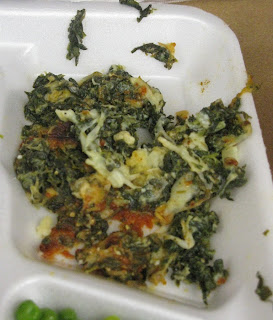 After picking out as much of the noddles and cheese as she could, this was the heap of spinach my daughter left on her tray. "It was just too much spinach," she told me later.

Some of the kids--not many--ate the peas and the salad. But most of this, unfortunately, also wound up in the trash. The U.S. Department of Agriculture is proposing to sharply curtail the use of green peas, potatoes, corn and other "starchy vegetables" in favor of more dark green, orange and red vegetables.

That would mean the sweet potatoes the kids didn't eat on Monday I suppose.
Posted by Ed Bruske at 6:00 AM