Head of Harvard Nutrition Unit Says No to Chocolate Milk 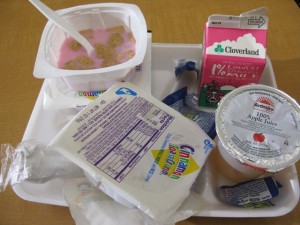 Too much sugar in school food?

The dairy industry would like to see Americans everywhere lift a glass for chocolate milk—and pour one for their kids while they’re at it. Dr. Walter Willett, chairman of the department of nutrition at the Harvard School of Public Health, sees that as a recipe for a health disaster.

Willett says the nation’s schools should not be serving sugary chocolate milk to children, adding that too many refined, starchy foods in the federally-subsidized school meals program pose a risk of obesity and other weight-related illness.

“These highly sugared milks make absolutely no sense whatsoever,” Willet said in an interview. “The use of sugar as an important part of the diet makes absolutely no sense nutritionally, especially when obesity is the number one health problem facing our nation.”

Willett and Harvard colleagues recently went public with findings exonerating fat and blaming sugar and too many starchy carbohydrates--such as those found in bread, pasta and potatoes--for many of the nation’s health problems, including obesity, diabetes, hypertension and heart disease.

Willett, who had not spoken out publicly on the school food issue previously, thus adds Harvard’s prestige to a growing chorus of critics questioning the routine use of flavored milks and other sugary products in school meals.

Meanwhile, an Emory University study described as the first of its kind finds that children who eat lots of sugar are at greater risk for heart disease. Released this week, the study found that sugar accounted for more than 21 percent of the calories in the diets of average teenagers, resulting in lowered levels of “good cholesterol” (HDL) and elevated levels of fat in the blood (triglycerides), both key markers of heart disease.

In examining dietary survey results compiled by the U.S. Centers for Disease Control from 2,157 teenagers across the country, the study found that some teens got an astonishing 30 percent of their calories from sugar. Overweight children with the highest level of sugar consumption also showed increased signs of insulin resistance, a precursor to diabetes.

Most of that sugar is believed to come from sodas and other sugary beverages. Sugar, while delivering calories, has no nutritional value, and some have called it an “anti-nutrient” because of the health problems it can cause. Yet it has become a regular stand-in for real food in school meals because it delivers lots of calories at little cost.

Greg Miller, a nutritionist and executive vice-president of research , regulatory and scientific affairs at the National Dairy Council, defended flavored milk in school meals, saying he routinely feeds his own children chocolate milk because of the many nutrients it contains—calcium, vitamin D, potassium, riboflavin, to name a few—and because his children won’t drink plain milk.

Miller said studies indicate that kids offered chocolate and other milk products with added sugar get equally good nutrition as drinkers of plain milk and do not show signs of being any heavier. “Certainly we want to be concerned about sugar,” Miller said. “But I look at other places to cut sugar—less nutrient-dense foods, like cookies.”

The National Dairy Council vigorously promotes flavored milk in school through the industry’s “Raise Your Hand for Chocolate Milk!” campaign. Miller noted that companies such as milk giant Dean Foods are looking for ways to reduce the sugar content of flavored milk. “We want to be a responsible industry,” he said.

Likewise, the School Nutrition Association, which is partially funded by the dairy industry, and where dairy interests have a seat on an “industry advisory committee,” also continues to promote flavored milk in schools despite its sugar content.

The SNA represents some 50,000 of the country’s school food service workers, giving it broad influence over the kinds of foods served in school cafeterias.

SNA spokeswoman Diane Pratt-Heavner pointed to proposed nutrition guidelines for school meals, published in October 2009 by the Institute of Medicine, that set no limit for sugar in school meals and make specific allowances for including sugary flavored milk on cafeteria menus.

Saying they were “concerned that eliminating all flavored milk would result in a substantial decrease in milk intake,” committee members cited a 2008 study published in the Journal of the American Dietetic Association that found that children who prefer flavored milk drink just as much milk as kids who prefer plain, and get just as much nutrition without adverse weight gain.

That study was funded by dairy interests and written by nutritionists with longstanding ties to the industry.

The IOM committee also said it expected that reducing calorie requirements for school meals, increasing the amount of fat permitted, and requiring bigger portions of vegetables and whole grains would tend to squeeze sugar-laden foods such as desserts off school menus.

The recommendations, written at the behest of the U.S. Department of Agriculture, have not yet been formally adopted, but are expected to be released today for public comment.

The USDA requires that schools offer milk with breakfast and lunch. Kids overwhelmingly prefer chocolate milk over plain. Estimates indicate that between 60 and 70 percent of the milk consumed in the school meals program is flavored.

Many children start their day with a government-sponsored breakfast consisting of strawberry-flavored milk containing nearly as much sugar as Mountain Dew, ounce-for-ounce, poured over a bowl of Apple Jacks or other sugar-enhanced cereal. Until recently, kids as young as five here in the District of Columbia routinely were being served the equivalent of 15 teaspoons of sugar before classes even started, and experts say that’s not at all uncommon in school districts around the country. Some are even worse.