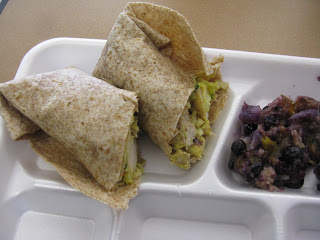 Here's some news: frozen food doesn't have to be bad. For instance, you can do some pretty amazing things with frozen chicken.

Okay, so it isn't local, pastured chicken. It comes from a factory farm (CAFO: confined animal feedlot operation) far away, processed most likely by an industry giant like Tyson. But this is, after all, school food, made on a tight budget and frequently chicken is on the list of the U.S. Department of Agriculture's commodity foods, meaning schools get a substantial break on the price.

When you make school food, you also have to make some compromises.

In Boulder, Colorado, I had a fabulous barbecued chicken sandwich made from frozen "diced chicken." There, Ann Cooper has hired professional chefs to devise recipes that turn simple frozen and canned products into delicious cafeteria food. Here you see "honey mustard chicken," as Chartwells calls it, wrapped in a "whole wheat" tortilla with lettuce.

This is offered on Tuesday's as the cold alternate to the hot meal selection in D.C. schools. It's not true that school food has to be bad. But making it better does require some imagination and motivation to spend a little extra effort.

To be honest, however, few of the kids at my daughter's elementary school choose options like this and I think that's primarily because they just aren't familiar. As I learned during my week in Boulder, where the food services department was actively recruiting parents and student interns to help in the cafeterias, it takes active taste-testing and coaching in the cafeterias to get kids to eat new and different foods.

Unfortunately, here in D.C. we haven't seen any effort on the part of our local food services team to collaborate with parents or the broader community. We can hardly get them to communicate anything at all.
Posted by Ed Bruske at 6:51 AM