What's for Breakfast: Gorging on Carbs 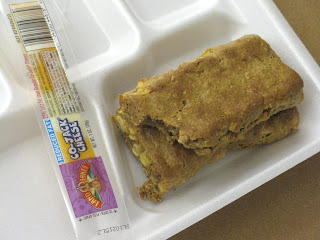 By Ed Bruske
aka The Slow Cook
It's always interesting for me after writing about national school food issues to visit the cafeteria at my daughter's elementary school here in the District of Columbia and see what's happening on the ground.
This week I've been spending quite a bit of attention on milk, sugar and the possible health effects of too much sugar and refined carbohydrates. So what did I see at breakfast on Thursday? Not one, but two breakfast bars on this girl's tray. She had gotten an extra one from a friend, and was trying to score a third from the other kids who were sitting at the tables.
This "BeneFIT" brand bar looks innocent enough. Lately the lunch ladies have been removing them from their original packaging and serving them naked as you see in the photo. Perhaps that's to shield kids from the brand labeling. But it also removes the nutritional information. But I already have a wrapper in my files.
A single "apple cinnamon" bar delivers 290 calories derived from 48 grams of carbohydrates, including 23 grams of sugar. That's the sugar equivalent of nearly six teaspoons. The label lists "whole wheat flour" as the first ingredient, meaning kids are getting the benefit of some fiber--3 grams per serving. Still, this is a huge load of carbs. And if this girl gets her hand on three of them, she will have eaten nearly 900 calories, more than in a Big Mac cheeseburger.
In theory, there is portion control in school cafeterias. Kids can only take so much in the meal line. But what happens after they leave the meal line is up for grabs. Often, it's the kids who don't need the extra calories or carbs who manage to eat the most--sometimes multiple servings.
Sadly, there's no one in the cafeteria monitoring these things. But try to imagine a school cafeteria where parent volunteers were on hand to help coach kids on better eating habits.
Can you imagine such a thing?
Posted by Ed Bruske at 6:00 AM