A Word to Parents About Calcium 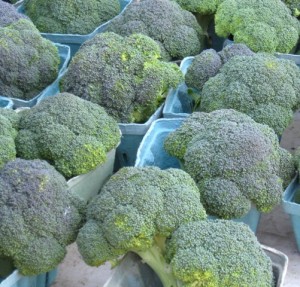 Broccoli: a good source of calcium

Parents can breathe a little easier now that a group of experts in the most authoritative assessment yet [PDF] has found that kids are not suffering a “calcium crisis” as the dairy industry might have us believe.

Still, with school districts all over the country debating whether they should be serving sugar- injected chocolate or strawberry-flavored milk on a routine basis, parents too often get conflicting messages from their local food services director, their pediatrician, the dairy industry and from healthy food advocates.

Since I’ve been talking to a number of experts over the last couple of weeks, I thought I’d empty my notebook and try to cut through some of the calcium fog.

The findings by a panel of medical authorities convened by the Institute of Medicine were groundbreaking because they indicate that most Americans already get most of the calcium and vitamin D they need and gain little advantage from taking supplements.

As the panel explained, however, giving nutritional advice to an individual person is one thing, making recommendations that can be followed by an entire country of 300 million people is quite another. After considering all kinds of caveats, fudge factors and rounding variables, the panel established some numbers representing what might be called a best guess at the amount of calcium and vitamin D we should be consuming in our diet.

In so doing, the panel did identify one group of children who appear to come up a bit short on calcium. That would be pubescent girls who might need to increase their daily calcium consumption by 200 grams or so—the amount in a single serving of string cheese or a half-cup of cooked collard greens.

I spoke with Dr. Steven A. Abrams, a professor of pediatrics at Baylor College of Medicine who specializes in the calcium intake of children and was one of the panelists who wrote the IOM report. He said the group in question encompasses primarily girls between the ages of nine and 14, who currently may be getting somewhat more than 800 grams of calcium in their diets, but should be consuming “between 1,000 and 1,100.”

Why is getting more calcium so important for this age group? Medical research shows [PDF] that leading up to and during puberty, children experience a growth spurt and establish around 40 percent of the bone mass they will need in later life. Calcium and vitamin D work together to create healthy bones. The same is true for both girls and boys, but Abrams said boys already get more calcium, probably from eating bigger portions of foods with dairy in it—like cheesy pizza.

That leaves the girls. Greg Miller, a nutritionist and executive vice-president of research , regulatory and scientific affairs at the National Dairy Council, says he routinely feeds his own children chocolate milk because of the many nutrients it contains—calcium, vitamin D, potassium, phosphorous, riboflavin, to name a few—and because his children won’t drink plain milk.

Miller said studies indicate that kids offered chocolate and other milk products with added sugar get equally good nutrition as drinkers of plain milk and do not show signs of being any heavier. Indeed, the USDA has found that in the school lunch program, where kids overwhelmingly prefer chocolate and other flavored milk to plain milk, kids who participate in the hot lunch line get more calcium than kids who eat elsewhere.

But Dr. Walter Willet, chairman of the school of nutrition at the Harvard School of Public Health, told me he rejects a nutrient-based approach to diet. Milk, he said, “is not an essential nutrient”—calcium is found in lots of different foods. Plus, he said there is little evidence to suggest that children’s bone growth is being impaired by a lack of calcium. “We aren’t seeing a lot of children with fractures,” he said.

I got a very similar response when I asked nutritionist and food politics author Marion Nestle whether the dangers of sugar outweigh the calcium benefits in flavored milk.

“I see them as two distinct issues,” Nestle said. “Sugars in flavored milk are not dangerous. They won’t kill anyone outright. What they do is teach kids that all foods have to taste sweet and they don’t need to get used to eating savory foods if they don’t want to.”

Nestle continued: “Calcium is found in virtually all unprocessed foods and milk is not an essential nutrient.”

But a leading medical voice on the dangers of sugar, Dr. Robert Lustig, a professor of clinical pediatrics at the University of California at San Francisco specializing in endocrinology and obesity, argues that schools should not be offering flavored milk to children precisely because of sugar's link to obesity and a host of metabolic problems, such as diabetes, hypertension, coronary artery disease and non-alcoholic fatty liver disorder in children.

Lustig, however, sees the problem with children’s bone health as not one of too little calcium, but too little vitamin D. “There is certainly a Vitamin D crisis. Every kid is Vitamin D deficient today,” Lustig said. “I'm for vitamin D supplementation as a pill for all children.”

Lustig cites recommendations issued by the American Academy of Pediatrics calling for children to consume 800 units of vitamin D daily. But those were issued before the Institute of Medicine report, which recommends 600 units. The IOM panel found that while most people seem to consume too little vitamin D, measures of their blood show they have more than enough, indicating they get plenty from exposure to the sun.

Vitamin D is synthesized by the skin from sunlight.

Should schools have a specific calcium strategy besides offering chocolate milk to all students? Is there any way to target girls aged nine to 14? I asked Ann Cooper, the school food activist who serves some of the best cafeteria meals in the country in Boulder, Colorado.

In Boulder, and previously in Berkeley, Calif., where she also switched the school menu from processed convenience foods to meals made with whole ingredients, Cooper has eliminated flavored milk as an option. Kids can serve themselves plain, organic milk from refrigerated dispensers instead. I’ve had it and it’s delicious and refreshingly chilled—better than any milk in a carton by far.

Cooper says she also has plenty of calcium-rich foods on the salad bars--there’s one in every school, and kids are welcome to help themselves without limit. “We have lots of cottage cheese and yogurt,” Cooper said. “We’re serving hummus almost every day.”

“I’m not a doctor or a medical professional," Cooper said, "but I just think that with all the problems we’re seeing because of obesity in younger and younger kids—diabetes and heart disease—there’s got to be a more reasonable way to make sure those girls get enough calcium than feeding them sugar."

“The problem chocolate milk is solving is not calcium," Cooper said, "it’s the profitability of the dairy industry. They feel they’re losing market share to soda, and that’s what chocolate milk is supposed to address. If it weren’t for the Dairy Council pushing chocolate milk, there wouldn’t be this confusion. If we’re solving for calcium, then let’s talk about all the way kids can get calcium.”

Sorting through all these expert opinions is hard and I know lots of parents are concerned. Parents don't want to be caught in the middle of a debate. Mostly they just want their kids to grow up healthy. Like me, they may have an 11-year-old daughter who’s growing like crazy, who’s not only lactose intolerant but doesn’t like milk, who eats some cheese, an occasional yogurt smoothy and prefers broccoli above all vegetables--but otherwise craves carbs like every other kid.

What do you do then? As Cooper points out, kids are only in school 180 days a year. Even if they are eating breakfast and lunch at school, they’re getting most of their meals at home. Parents need to be primarily responsible.

In our own home, we offered our milk-averse daughter a choice: either she could start taking a calcium supplement every day, or she could eat a bowl of Total cereal fortified with 1,000 milligrams of calcium before she left for school in the morning.

She picked the Total.