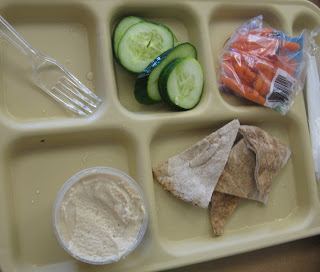 Although this lunch looks sparse, it comes fairly close to the 664 calories the U.S. Department of Agriculture says schools must offer for lunch daily to kids in Kindergarten through grade six averaged over a week. (An 8-ounce carton of unflavored milk, not shown here, would also factor into the total.)

An half-cup portion of hummus such as the one shown here, packed with healthy fiber, contains around 220 calories, and a serving of pita bread adds another 260. There may be 50 calories in the cucumbers and carrots combined, and a carton of milk contains another 120 calories.

According to my calculations, that's 650 calories--and without any added sugar! (At least I don't think so, although the manufacturer could have snuck some into the hummus. We don't have the ingredient list.)

The hummus originates from a company called Kronos Greek Specialties in Glendale Heights, IL. According to the company's website, it's sold in packages of two four-pound tubs, then our local kitchen ladies scoop it into plastic cups, as shown in the photo. School officials have said they hope to have a website up and running in November where the public can find all of the ingredients for foods served in D.C. Public Schools.

The "locally grown cucumber coins" have an added feature: being local, they earn the schools a five-cent bonus per meal from the D.C. treasury. I wonder how they keep track of that, since the cucumbers were only offered with the alternate meal, not with the main meal served on this particular day.

Chartwells at its menu website listed the carrots as "carrot sticks," but in fact they are "sanded" carrots (aka "baby" carrots.)

This meal seams like a smart use of processed foods (Greek hummus made from chickpeas and tahini), as opposed to some of the really awful processed foods we've seen in the past. Perhaps there are other ethnic foods that could be deployed in the school meal program. Can you think of any?
Posted by Ed Bruske at 12:01 PM