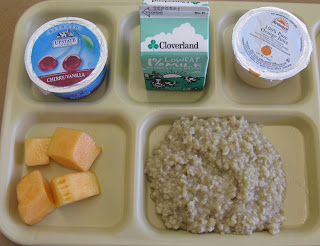 Here is the hot breakfast option Chartwells served at my daughter's elementary school on Wednesday. This is Quaker's "Quick Oats," cooked in the kitchen's steamer and seasoned with cinnamon. I tried it. It was good. Unfortunately, my daughter won't eat oatmeal. Her loss.

The cantaloupe is billed as "local," meaning it comes from a farm within the Mid-Atlantic region and earns the schools a five-cent bonus from the city under the "Healthy Schools Act." Along with Chartwells' online menus, the schools have posted a list of farms [PDF] where they are sourcing produce. However, the list does not include cantaloupe. Perhaps we can get someone from D.C. Public Schools to tell us where the cantaloupe comes from. It arrives raw, and one of the kitchen crew removes the rind and seeds and cuts it into large dice to be served. I tried it: It's ripe and flavorful.

Something that's a little less clear is why the schools insist on dosing the kids with orange juice every day in addition to milk. Otherwise, they've done an excellent job of removing much of the unnecessary sugar from the breakfast menu by eliminating chocolate and strawberry milk. A 4-ounce container of orange juice as shown here contains 11 grams of sugar in the form or fructose, or nearly three teaspoons. The yogurt also contains as much sugar, ounce-for-ounce, as Mountain Dew.

It could be worse. A similar sized portion of grape juice contains almost twice as much sugar, or five teaspoons. Do kids really need two beverages with breakfast? Schools are required to offer milk with meals. But they are not required to offer juice. Furthermore, this tray already has melon on it. Do kids really need two fruits with breakfast? And if you count the cherries in the yogurt, there are actually three fruits in this meal. Does that seem like overkill to you?

In fact, there's nothing stopping D.C. schools from offering juice on an occasional basis and using the savings to improve the quality of the food being served.
Posted by Ed Bruske at 5:14 AM