Regard, the Turkey Wrap 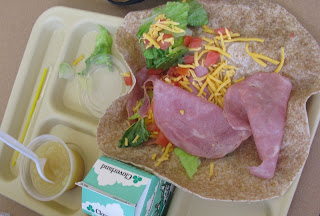 The standing alternate cold lunch option in D.C. schools on Tuesdays is a turkey wrap. Just by chance, I happened to see some boys in the cafeteria who had gone to the trouble of unfolding their wraps to reveal what was inside. (Some, apparently, were removing the vegetables.)

First, the tortilla itself appears to contain more whole grain than in the past. The "turkey" in fact is processed turkey breast conveniently sliced into deli portions. It does seem a bit dry, but the grated cheddar, diced red bell pepper and lettuce are a thoughtful touch. 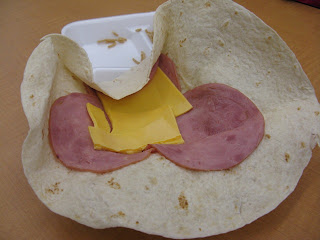 Compare that to the "lunch meat burrito" the schools were serving as recently as last April. It's the same processed turkey, but notice any differences?

While some things have stayed much the same, school meals in the District of Columbia do seem to have undergone some dramatic changes over the summer. Maybe that's what Food Services Director Jeffrey Mills meant when he said he and has staff were busy taste-testing some 300 different "products" while the rest of us were on vacation.