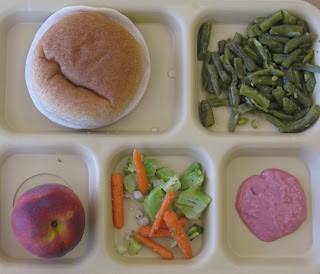 Chartwells had its menu writers working overtime on this one. At its website, the company describes this as "sliced oven-roasted turkey on a whole wheat mini sub roll with cranberry mayo," plus "fresh veggie gardenaria with broccoli and carrots," "seasoned green beans," and "local peach."

My dictionary (Webster's New Universal Unabridged) doesn't even list "gardenaria" as a word. It looks to me more like frozen broccoli and "sanded" carrots cooked together, although these broccoli do seem to be holding together better than the frozen variety I've seem steamed into oblivion in the past. The "seasoned green beans" are out of a can. And the "oven-roasted turkey" is simply processed turkey breast that arrives sliced and frozen from the Jennie-O Turkey Store in Willmar, Minn.

I'm not sure how the "cranberry mayo" was made, but it sure was pink. The kids debated each other over what they were supposed to do with it. Some were dipping their carrots in it.

The "local peach" seems to be the one item on this tray not suffering an identity crisis. And being local, it also earns the schools a five-cent bonus from the D.C. treasury.
Posted by Ed Bruske at 12:01 PM