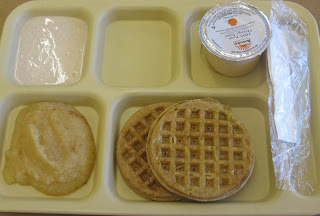 Here's breakfast in shades of brown. At it's menu website, Chartwells was calling this "warm whole grain waffle with organic cinnamon vanilla dipping sauce." The "dipping sauce" is Stonyfield vanilla yogurt seasoned with powdered cinnamon. Well, that's got to be better than the high-fructose corn syrup they used to serve with the frozen waffles, right?

The canned apple sauce to my taste buds was unsweetened and also flavored with cinnamon. To wash it all down, orange juice. Still, for calories, this breakfast is highly reliant on sugar to go with a lot of carbs. But the kids like it--especially the waffles, the apple sauce and the juice. Kids like anything sweet and bread-like.
Posted by Ed Bruske at 7:00 AM