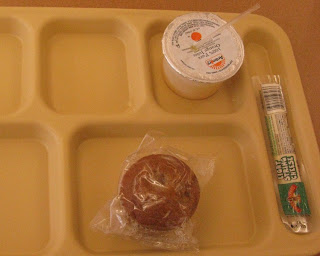 The federal government says that school breakfasts served to elementary school students must contain 554 calories to qualify as a reimbursable meal. The "cold" breakfast option in D.C. schools on Friday was a muffin and string cheese. My daughter, who is lactose intolerant, declined to take milk. But in terms of total calories, that would make 110 for low-fat milk, 60 for the string cheese, 55 for the orange juice for a total of 225 calories. There's no nutritional information with the muffin, but I'm guessing it does not contain 329 calories.

There's a wrinkle to the federal rules, however. The daily calorie requirement is supposed to reflect an average for the week, meaning some meals might contain more than 554 calories, others less.

The only cold breakfast option I saw listed for the first two weeks of school that came even close to that was the one with a processed breakfast bar called BeneFIT that packed a whopping 48 grams of carbohydrates (starch) and 23 grams of sugar (more than in a Pop-Tart, and almost as much as in an 8-ounce carton of chocolate milk), for a total of 290 calories. Or maybe it was Wednesday's whole wheat bagel with cream cheese and "all natural yogurt" containing four teaspoons of sugar in a quarter-cup portion.

Those are the prevailing federal standards, as administered by the U.S. Department of Agriculture. Meanwhile, the school meal standards contained in the District's "Healthy Schools Act" set a minimum calorie requirement for breakfast of 350 in pre-kindergarten through grade eight, and a maximum of 500. But the current food services director for D.C. Public Schools says he's adopted even better standards--those proposed by the Institute of Medicine, which call for 350 to 500 calories at breakfast for kindergarten through grade five.

The IOM standards were requested by the USDA, but it may be years before the USDA actually adopts them.

You needn't be. The common denominator running through this rat's nest of government standards is that when schools are unable to offer kids enough calorie-dense real foods to comply with regulations they serve up sugar instead. To add a further complication, the federal rules state that schools can include in their calculations all of the foods offered on any given morning--the milk, the muffin, the string cheese, the orange juice--even though the kids can decline one of those items and still qualify for a federal reimbursement under the government's nutrient-based menu system, or they must take three items under the food-based menu system. (Could it be any more complicated?).

That helps explain why juice, with its extra dose of sugar, is being offered every day for breakfast in D.C. schools alongside milk.

Take your pick: On any given morning, kids aren't getting as many calories as the government calls for, or they may be getting them in the form of sugar. Does that mean schools are lax for not offering better options, or are the federal standards crazy and the amount of financial support provided by the federal government simply inadequate to offer the kinds of healthy foods kids should be eating?

The irony, of course, is that we pleaded with D.C. schools to get rid of sugar and they responded: They dumped flavored milk and sugary cereals. They've also gone to some pains to introduce things like cottage cheese and string cheese and local fruit. What else can they add in the way of real food that will satisfy the government's calorie requirements without dosing kids with more sugar?

D.C. Public Schools have an advantage as a result of the extra funding provided by the "Healthy Schools" act: 10 cents more for breakfast, 10 cents more for lunch and five cents for each meal that contains a locally grown component. Imagine the predicament of other school districts where the local government has not stepped forward with extra cash. The extra six cents per meal recently embraced by the U.S. Senate as part of the Child Nutrition re-authorization looks punier and punier all the time.
Posted by Ed Bruske at 6:00 AM