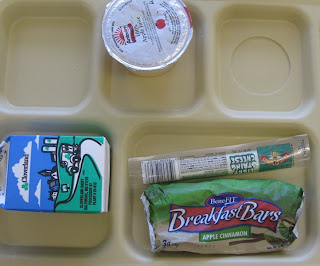 Have you ever read the ingredient label on a so-called fitness food? They usually advertise themselves as healthful becuase they're low on fat and maybe supercharged with fiber. But if you look closely, you'll often see that what these "health" foods are missing in fat is more than made up for by a big dose of sugar.

Despite its current reputation, fat, along with protein, is a necessary macronutrient. We cannot survive without it. Sugar, on the other hand, is treated by the body as a toxin, and is closely linked to a host of medical issues, such as elevated levels of unhealthy cholesterol and triglycerides, high blood pressure, weight gain and obesity, diabetes and--here's something new and alarming--a sharp increase in the incidence of non-alcoholic fatty liver disease in children.

D.C. Public Schools this year took the bold step of removing flavored milk products with added sugar from the menu, as well as sugary cereals. We also have not been seeing popular sugary "treats" such as Pop-Tarts, Giant Goldfish Grahams and Otis Spunkmeyer muffins.

So why add the sugar back in the form of something called a "BeneFIT Breakfast Bar"? According to the label, this 2.5-ounce packaged food contains a whopping 290 calories, 48 grams of carbohydrates and 23 grams of sugar, the equivalent of nearly six teaspoons. It's being offered as a standing alternative to the hot breakfast in D.C. schools on Tuesdays.

The "Healthy Schools Act" that went into effect this year in the District of Columbia mandates a maximum of 550 calories for a school breakfast through eighth grade, but it does not set any standards for the use of sugar in meals.

By contrast, a "whole wheat" Pop-Tart weighing in at 1.8 ounces contains 190 calories, 35 grams of carbohydrates and 13 grams of sugar.

Here are the ingredients listed on the BeneFIT package:

Furthermore, environmental and wildlife groups object to the use of palm oil in prepared foods because jungle habitat necessary for the survival of endangered orangutans is being destroyed in order to grow palm plantations.

On the other hand, the additiion of string cheese to D.C. school meals should relieve parents who worry that their kids aren't getting enough calcium.
Posted by Ed Bruske at 9:37 AM